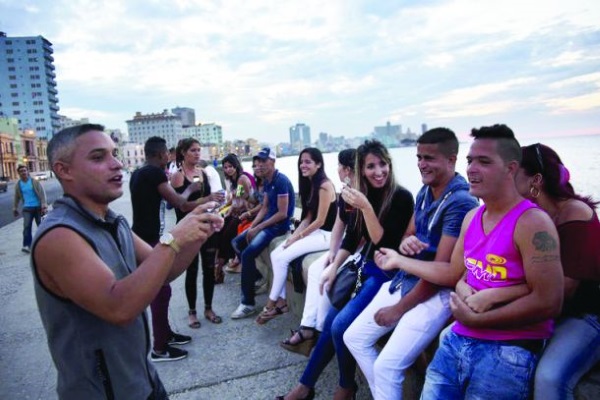 Cubanet, Miriam Celaya, Havana, 8 June 2015 — In the beginning, there were the cassettes, first the ones we viewed on ancient Betamax equipment, and a bit later on VHS. In those dark years in the 90’s, the illegal dealers, better known as “messengers” would arrive with their backpacks, pedaling their inseparable bikes, from customer to customer. They charged of 5 or 10 Cuban pesos rent per cassette, depending how many movies were on each tape and the quality of the recording.

Video equipment was not readily available among Cubans, so the happy owner of one of these was not only privileged, but he would become the host of friends and nearby neighbors who eluded the harsh reality of the so-called “Special Period,” taking refuge in some colorful Hollywood product or another, usually recorded by the even more restricted group –favored among the favored- who owned a DIRECTV antenna.

Sharing a show or a movie was also a matter of affinity and solidarity at a time when almost all Cubans suffered the brunt of an economic crisis which, in the same way as the system that generated it, seemed to have no end. So some fellow invitees would agree to rotate the expense for renting the cassettes or contribute some snack to improve the get together, such as tea or coffee or another beverage, duly accompanied by roasted chickpeas.

The messenger, meanwhile, had to have sufficient intuitiveness and training to sort out certain obstacles.  His was an illicit occupation, so the risk of an envious denouncement on the part of a member of the CDR [Committee for the Defense of the Revolution] or police harassment.  Law enforcement officials would hunt down the messengers to confiscate the tapes and later resell them on the black market to another messenger or the owner of some video store, which was also illegal. Thus, the circle was complete.

The authorities had arranged a police hunt to end this practice, which favored “the imperialism’s ideological penetration” in the Cuban population, and affected “especially the young.” In workplaces–in particular those involved in social sciences and research–the battle against the subtle enemy propaganda was an essential point in the guidelines of the nuclei of the Cuban Communist Party (PCC) and the administrative and syndicate leadership, though many of the leaders themselves and almost all of the workers were regular users of the “venomous” product.

Thus, while during working hours the system’s bureaucrats railed against “track two,” the official label for the “ideological war” of the US government against Cuba, on the domestic front the consumption of the demonized product was growing exponentially. Without a doubt, the same “black” propaganda that the government whipped up against foreign shows and movies only managed to interest the audience in favor of its consumption. The olive-green battle against Yankee influence was doomed to failure.

The “antenna” and DVD’s, imperialist agents of the “zero years”

With the arrival of the twenty-first century and of new informational and communication technologies, video-cassettes were falling into obsolescence, even on this backward and un-computerized island.

During the last few years of the previous decade, DVD technology made its entrance, supplanting old video equipment and favoring the proliferation of CD’s“burned” in some living room, and distributed the same way by a whole army of messengers. The use of satellite dishes proliferated, and their owners rented out their networks to the homes in their vicinity which were able to pay for the use of those services.

Although limited to the preferences of the owner’s shows, the system expanded rapidly in the capital and main cities with large population concentrations, which made it difficult for the repressive forces to detect and confiscate the equipment.

On the other hand, the more technology moved forward, the more difficult the struggle against it. It was no longer about pursuing messengers fleeing on bikes through the maze of streets, but it was necessary to mobilize specialized resources, personnel and equipment, in addition to police patrols that needed to take part in confiscating equipment and arresting offenders.

Such deployment of repressive forces carrying out their duties on one block allowed for entertainment dealers to dismantle equipment in the surrounding areas, stowing it in secure sites. Soon Cubans learned to identify the minivan with the signage “Radio Cuba” that headed the police delegation, and soon the owners of the antennas also had their own informants at the police station, who, through bribes, would warn them ahead of time about the confiscating operations. At any rate, each piece of seized equipment was like a Greek war victory dance for the authorities, taking into account the cost of the operation and the meagerness of the harvest.

The government would score another embarrassing defeat against resources dictated by popular fancy and the experience of half a century of survival in the midst of ploys and unlawfulness.

The Internet, the devil incarnate

With that stubbornness of the mentally castrated, today’s official lackeys pull out their hair and rend their garments before the evidence of the inevitable: the preference of the overwhelming majority of Cubans for the cultural products of “savage capitalism.”. The illegal vessel that now often lands on a weekly basis in Cuban homes is the so-called “package” which has broken all records set by its predecessors’ audiences.

Today, it is almost impossible not to hear from a neighboring home the sounds of regular foreign TV. The package has invaded national domestic life to such an extent that Cuban TV has become an almost furtive intruder amidst an empire of consumption of smuggled audiovisual materials.

An external hard drive is all it takes to transport terabytes of capitalist entertainment and culture that is broadcast in “socialist” Cuban homes at affordable prices, between 25 and 30 Cuban pesos, to break through the grayness of State TV programming.

However, the appointed censors, with that infinite vanity that makes them believe they are arbiters of what should be the general taste and the managers of what each Cuban on the Island should culturally consume, labels as “banality” peoples’ tastes favoring a soap opera from wherever over Cuban TV’s La Mesa Redonda (The Roundtable) and knowing by heart each new series that airs, every movie that comes out, and what Alexis Valdés newest joke is, in addition to a host of musical talents and of the most diverse foreign shows, including cartoons and a great variety of kids programming that fills in the gaps, the blandness, and the poor quality of Cuban TV programming dedicated to children.

Much to the despair of frustrated cultural bureaucrats, the antenna has now been enriched by the undisputed power of the Internet, that “runaway horse,” shortening the time between what is produced and what is consumed in the cultural field, in addition to allowing coherent news updates outside the government system.

In this vein, it is not surprising that the official cymbals and trumpets have summoned their cultural curators and their rusty institutions to fight yet another battle against Yankee penetration, as if this was not already a fait accompli. The cultured officials, like vestal virgins, are outraged with the surrender of the former warrior people to the seductive charms of the consumer society.

With their characteristic lack of creativity, the ever-killjoys have launched their own strategy: “backpack” — a ridiculous parody of the “package” — whose most eloquent proof of modernization is the inclusion, among their offerings, of Cuban TV series that made history with the national audience in the ’80s: ” “En Silencio ha Tenido que Ser” [It’s had to be in Silence], “Julito el Pescador” [Little Julio the Fisherman] or “Algo Más que Soñar” [Something Else to Dream About]. And they still expect to be taken seriously.

The truth is that, as technology makes strides and its messengers refine their strategies of survival to escape official controls and sell their products, repression –just like the system it represents — continues to be tied to the same methods of surveillance and prosecution typical of the Cold War era. They remain anchored to a past that will not return.

By now it is obvious that Cubans like a colorful world that arrives each week in the package more than the promise of eternal poverty that everyday life throws at them. The socialist mirage that mobilized us decades ago has died a natural death: it suffocated, submerged in its own failure. The date that today excites humble Cubans is with capitalism, even if, for the moment, it’s only through their TV screens.