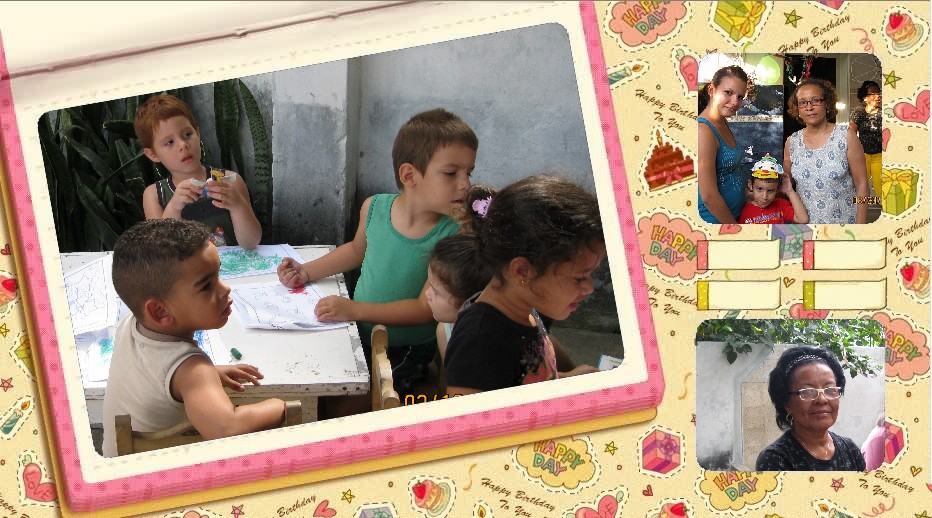 Cristopher’s 4th birthday was celebrated at his nursery school, together with the celebrations of three other pre-schoolers (two girls and a boy). The custom of celebrating the birthdays of preschool and elementary school students at their day cares or schools is very popular, because the “guests” are their little friends and the teachers.

The parents of the students are the organizers of the happy ceremony, but in Cristopher’s case the nursery school’s teachers surprised all the families involved in the party with the expensive hiring of a professional clown.

Although Cristopher’s’s family is very humble, a very special purpose is satisfied by the kindness of such an expense for the children’s party. Cristopher will go to a normal school next year, despite the fact that he suffers from a strange and dangerous disease: Simpson-Golabi-Behmel Syndrome. He is one of three cases of this disease reported in Havana.

Simpson-Golabi-Behmel Syndrome* is a genetic disorder characterized by gigantism. The patients show distinctive facial features and anatomical abnormalities that are specific signs of the disorder. Some of these dysmorphisms include macroglossia, “enlargement of the tongue”, heart problems, bone abnormalities, etc. The literature even reports frequent cases of premature deaths among patients.

The child’s parents have always had faith in the qualifications and competence of the medical team that treats their only child, including the specialist and the doctor’s office near their home. But the greatest merit, in my view, are the educators of “Los Maceítos” nursery school, and especially, the owner Deysi, a talented woman with long experience in State day care centers.

Deysi’s nursery school has had, for many years, an excellent reputation in the community. Even so, she hesitated when confronted by a mother accompanied by a child whose tongue does not fit in his mouth. But far from refusing to receive him, she had compassion on both and together with the teachers Yaneisit and Damaris they encouraged the youngster to keep his mouth shut and made him feel “as healthy” as other toddlers, who also helped by telling Cristopher: “Cusi, close your mouth!”

In May 2011, members of the Cuban Association for the DEVELOPMENT OF PRIMARY EDUCATION (ACDEI) began working in Los Maceítos pedagogically, with the objectives of social program called “Educate Your Child”, which in the past decades in Cuba has been developed in early childhood care. Other novel methods are also used, with recyclable material and other resources. In a relaxed and fun atmosphere we managed to develop Cusi’s cognitive and physical skills. Today he is one of the most advantaged students.

In sports, specifically in physical education, Professor Miguel García “former athlete on the national gymnastics team” develops motor skills in toddlers, and without the child noticing, he avoided tiring Cristopher out.

Children’s parties are part of the activities of the members of ACDEI. It’s a time to talk with parents, exchange views, “capture” the less concerned parents, and so on. We also record videos and take pictures of the party. Later we edit and deliver the DVDs to the honorees and the nursery school, as a reminder of the work undertaken.

The biggest surprise for the parents is that they get to appreciate the unexpected moments of celebration mixed with scenes of the classes taught and the activities of their children in situations that they didn’t even imagine.

Cusi celebrates his birthday and his good medical condition to begin school next year. The child still has limitations, but the progress is remarkable. Despite scarce resources, physicians recommend the nursery school to parents of other patients.

Meanwhile ACDEI advances, ready to face major challenges, although it means more work and study. As the prestige of the nursery schools grows, our work need to improve. No wonder ACDEI battles for legal recognition as an NGO. We have to help other Cristophers and improve the performance of private nursery schools in Cuba.