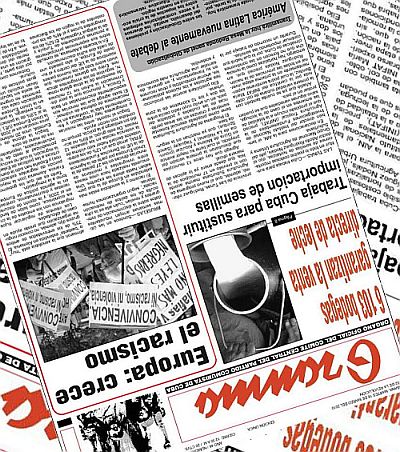 There are many jokes in Cuba alluding to the stereotypical information provided by the official press. Jokes about the tendency to narrate only the positive that happens in the national territory and to show the rest of the world through a succession of tragedies and negativity. One of the best known of these jokes is repeated when the prime time news begins and some families hang an empty bag under the television. “At least is can be filled up this way from the tons of meat, fruit and foods that show up only in the news reports,” say the cheeky housewives burdened by the shortages. Beside the sarcasm, there are linguists who have noted the use of verbs such as “grow, sow, build, develop” in the headlines referring to our own country, while they prefer to use words such as “die, bomb, prosecute, punish and destroy” for articles about the rest of the world.

Despite the fact that in recent years they’ve tried to offer a journalism closer to reality, triumphalism continues to set the standard for what appears in the mass media. A recent example is the outbreak of cholera that appeared in early June in the eastern provinces. The first evidence that something was happening was a text from an independent journalist. On the official digital sites this news was branded “another hoax from the imperialists.” Only to have to recognize weeks later that there is, indeed, an outbreak of vibrio cholerae in the City of Manzanillo. As people disbelieve so much of what the newspapers say, they even read this note in Granma with suspicion. To the figures of 3 dead and 53 infected, popular rumor started to increase the numbers. And all this speculation is because we have learned to read the news upside down and between the lines, and to distrust almost everything said on TV.