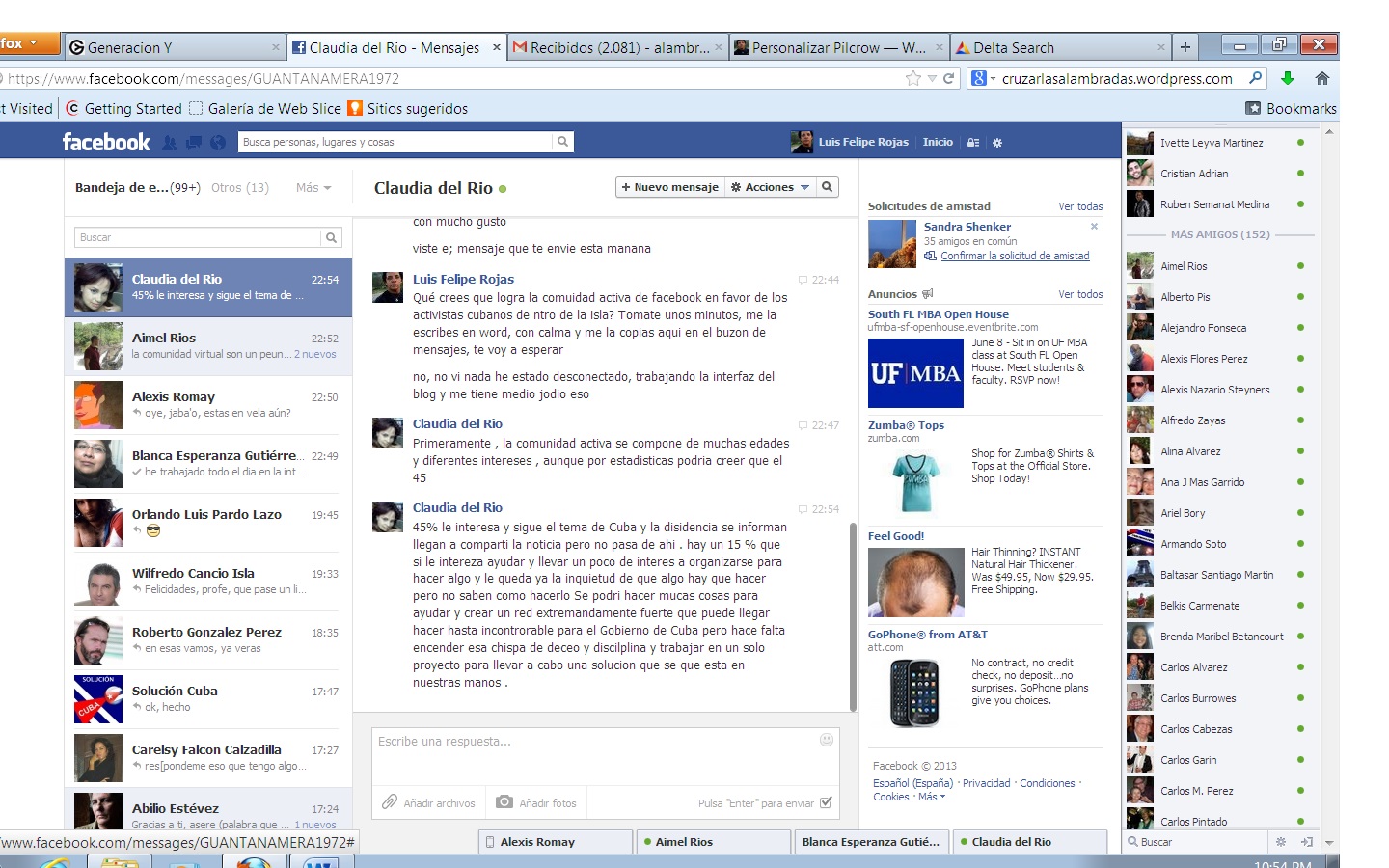 Screen shot taken of the conversation with these “friends” on Facebook.

Accused of being frivolous and made for gossip and rumors, Facebook, the well-known and so active social page, could be affecting in an unusual way a community thirsty to share information inside and outside the island.

A live messenger of information flow in many directions benefits young people inside as well as outside Cuba. Well into the night on Sunday we can talk with some about the impact of this social network on those who have been left inside the information corral. They sent their answers over here through mobile devices at odd times and with the imprint of a Facebook “chat.”

A social activist living in Miami, she supports pro-democracy changes believes there is something positive in the exchanges. “First, the active community is composed of many ages and different interests, although statistics could make us believe that 45% are interested and follow the issue of Cuba and part of the informed dissidence, they come to share the news but don’t go any further. There are 15% who are interested in helping and bring a little push to organize themselves, to do something and set aside the concern that something has to be done but they don’t know how to do it.

“They could do many things to help and to create an extremely strong network that could even become uncontrollable by the Cuban Government, but they lack that spark of desire and discipline, and working on a single project to bring about a solution that is in our hands.”

A specialist in communication and Associate Professor of Sociology and Latin American Studies at Baruch College, he believes that yes, there is a real impact that can already be measured, “Because FB functions as our modern agora. It is a meeting place for many people with frivolities but also causes and sacrifices. The major problem in Cuba is the lack of access and the monitoring.”

He is an expert in international relations and assistance and solidarity projects for ’people in need’. He is active on social networks, believing that the impact of a network like FB within Cuba helps “to have their voices heard in the world, they can speak for themselves. The virtual community is a bridge between the real Cuba on the island and the real community at the global level.”

She is an active young woman with a very visible militancy in Miami when it comes to the cause of freedom for Cuba. In the photos she uploads to her FB wall she appears alongside singers like Raudel (Escuadrón Patriota/Patriot Squadron) or Amaury Gutiérrez, or with human rights activists like Berta Soler. The activities she participates in she shares on Facebook.

“Social networks are free spaces to express yourself. Plus, they have the potential to be a bridge for communication from there (Cuba) to here, and here to there. I think it can help revive the interpersonal relations that have been lost through distance. Also it’s super-effective for spreading information. For example, when a dissident is being attacked there. Look, when there was an outbreak of cholera in Cuba… here we first heard about it through social networks, principally through FB.

“Also, due to the boomerang effect… many Cubans on the island also got that information. The flow of information benefits all of us, those there and those here, because we know that the official media are biased and say whatever they want whenever they want. Those of us from here also have a commitment to disseminate what comes out of there.”

(Lives in Cuba and only connects to the web when supportive friends allow it.)

“A social network like FB would definitely affect the island. The social purpose of the network inexorably coincides with the desires and the most primordial thirst for information that we Cubans have: family, neighbors, friends and all those “disappeared” from these geographic boundaries could return to us, those inside, as if by magic.

“For me, going to FB and writing a name os some friend or relative I barely remember, or browse among friends of friends, or among the suggestions on the site and see faces you barely remember and to return to them in this incredible little window of a message that is stronger than a hug and add them to your friends and see what they do every day, their photos, even their jokes… then Amsterdam or Monte Video are no longer those impossible places, where people are lost from pur memories without a word, perhaps another language, other times, but no longer this forgetfulness they condemn us to.”