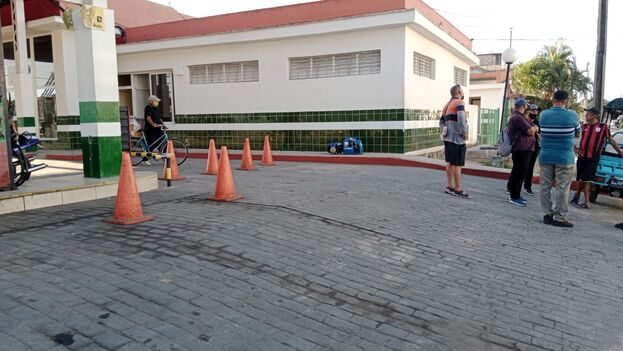 14ymedio, Juan Diego Rodríguez, Havana, 8 November 2022 — Barely two or three people in line filled their generators this Tuesday at the service center on Libertadores de Holguín Avenue. A day before, there were more than thirty customers, and their photos spread like wildfire on independent networks and media.

At the back of the long line they had already heard the news about the fuel shortage that plagues the country, which requires increasingly strict rationing measures. In Holguín, in particular, the owners of generators are obliged to “register” the device in the Cupet if they want to receive 2.6 gallons of gasoline.

“First we were told that the district delegate was in charge of making the list of generators that people have, especially those who use them to maintain a cafeteria or a rental house,” says Elisa, the owner of a guest house in that city. “But on the weekend, another neighbor who also rents to foreigners told me that we had to wake up on Monday and go to the gas station to be able to register the generator.”

At the gas station, they found more people in the same situation, some with their physical power plants, others with a photo or something that showed ownership of the device.

“The employees didn’t know very well what to do, but they finally noted down the identity card and serial number of each generator,” Elisa says.

The confusion was because, in reality, the latest official provisions for the province leave nothing explicit regarding this new “census.” According to a publication by the Cimex state corporation in Holguín on November 1, from that day on, a “scheme” would be established to “organize and expedite the dispatch of fuel,” indicating the type of vehicle, device or need for each Cupet gas station.

The one on Libertadores Avenue would serve for generators, “all fuels,” private and state cars, basic services, people with disabilities and tourism (“when there is no availability or current in Transtur,” they specify). Nothing was said, however, about quantity or frequency.

This Monday, after standing between motorcyclists and cars, Elisa bought her first 2.6 gallons of gasoline and was told to stop by the service center in the next few days to see what the “final” schedule would be to buy again. They detailed: “At the moment it’s between 10 and 12 days, depending on the availability of fuel.”

The young woman took the opportunity to leave her tax number in case that can help her in the future to buy more fuel for her private business, which shows her desperation and that of so many others in the same situation. “I have to guarantee customers that they will at least have a light in the bathroom if there is a power outage.”

User comments on Cimex’s provincial publication are full of complaints and criticism. “Every time they talk about ’reordering’* they make things worse; this country needs resources, not reordering,” complains Yunier Batista González.

“What they tell me about the licensed private motorcycles is that only the Cupet 4 de Abril is assigned to them for fuel, and they have to share it with all the other motorcycles that aren’t licensed,” says Yamil Naciff, who wonders why they are assigned a certain Cupet if “we are also taxi drivers… They don’t take us into account at all or give us importance, and that’s very serious, because we support our families with that work. Fuel instability kills us.”

Ivan Alexander Chacón, who explains his situation, believes that the new measures don’t solve anything: “I’m seeing it in person. I have been in line for three days and on a list to buy [fuel] for my motorcycle in La Loma. I needed to travel to Cacocum, and I couldn’t buy because I was from Holguín. You have to make sure to go to the Cupet and not miss [your turn]; this madness is seen only in the province of Holguín.”

The panorama in Holguín, however, is neither new nor unique. The first province to decree a rationing system for generators, more in demand as the blackouts increased, was Pinar del Río. There, since last August 20, only 5 gallons of gasoline are sold to generator owners “when it’s in stock in the Cupet.” To prove membership, they must present their identity card and proof “of ownership of the generator” to the Municipal Directorate of Economy and Planning.

In Havana, anyone who wants to buy fuel for their generator must also prove they own it, although they only need to bring the serial number to the service center, where 5 gallons will be dispatched, as reported to 14ymedio this same Tuesday by an employee of the Cupet at 25th and G, in El Vedado. Of course, he pointed out, “only when there is [fuel], because now there is nothing at all.”

*Translator’s note: The commentator is referring to the so-called  “Ordering Task” [tarea ordenamiento] which is a collection of measures that include eliminating the Cuban Convertible Peso (CUC), leaving the Cuban peso (CUP) as the only national currency, raising prices, raising salaries (but not as much as prices), opening stores that take payment only in hard currency, which must be in the form of specially issued pre-paid debit cards, and a broad range of other measures targeted to different elements of the Cuban economy.