14ymedio, Havana, 28 September 2016 – Dismantling the legal framework for the press and eliminating all barriers to individual access to the internet are key factors to promote a more open information environment in Cuba, according to the report Connecting Cuba: More Space for Criticism but Restrictions Slow Press Freedom Progress, published this Wednesday by the Committee to Protect Journalists (CPJ). However, the organization with headquarters in New York, highlights the progress made and suggests that “the foundations of a free press already exist” in the country.

Among other positive factors, it emphasizes the existence of “A lively blogosphere, an increasing number of news websites carrying investigative reporting and news commentary, and an innovative breed of independent reporters who are critical of, yet still support socialist ideas.” This transformation, it adds, means that it is possible to delve into issues that for a long time were treated superficially or ignored by the official press, making visible, for example, gay rights or allegations of corruption and poverty.

The report assesses the development of projects such as the site of narrative journalism El Estornudo (The Sneeze) and the in-depth articles on local issues in Periodismo de Barrio (Neighborhood Journalism), as well as “the sustained quality of 14ymedio, which provides readers with stories and perspectives that they can’t find anywhere else.”

“Space is opening up. Things are moving and the status quo is cracking,” Miriam Celaya, a contributor to 14ymedio, told CPJ. “But Cuba hasn’t changed as much as we would like.”

“The Cuban people deserve answers to numerous pressing questions,” said the organization, adding, “It would be foolish to expect that substantive answers to these questions will be forthcoming anytime soon. But they would become significantly harder to ignore if more Cuban journalists were asking them. For the sake of their country’s future, it is hoped that more Cuban journalists will decide to join those who have already crossed red lines.”

CPJ lists among the elements that hamper the progress of press freedom in Cuba “harassment and intimidation from authorities, a legal limbo caused by outdated and restrictive press laws, and limited and expensive access to the internet.”

The organization believes that the restoration of diplomatic ties between Washington and Havana has made it difficult for the Cuban government to justify censorship of the press as a means to protect the country from US aggression.

The main obstacle to the development of a free press, according to CPJ is limited access to Internet, as broadband connections are not available in most Cuban homes and the service is expensive. The low internet penetration in the country (Cuba has one of the lowest rates of internet access in the Western Hemisphere) means that the audience for new media is concentrated essentially in the US and Europe, while access to independent news sites such as 14ymedio is blocked, leaving island residents to seek alternative solutions such as the Weekly Packet.

“Despite facing many obstacles, Cuba’s journalists and bloggers have found innovative ways to distribute content, including using flash drives and underground computer networks, and sending articles via the state email system,” the report said.

The study reports that the use of Nanostations, a device that helps extend wifi signals and that is available on the black market, is also spreading. 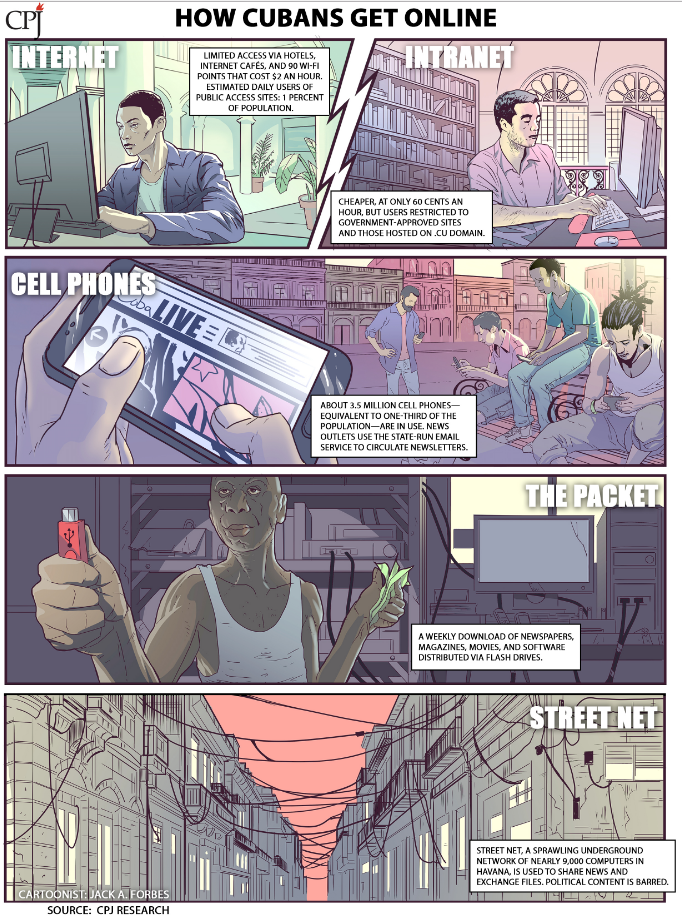 The report concludes with a series of recommendations to the Cuban Government, among which are requests for changes in the constitutional and legal framework to ensure that journalists can carry out their work without fear and can create private or cooperative media, the promotions of a critical state media, and better access to the Internet. In addition, the organization demands an end to arrests and practices of intimidation, and asks that the UN Special Rapporteur on the promotion and protection of the right to freedom of opinion and expression be allowed in the country

The CJP asks, in addition, for the Organization of American States (OAS) to act as mediator for the visit of the Rapporteur and to consider the Cuban government’s history on human rights in its work.