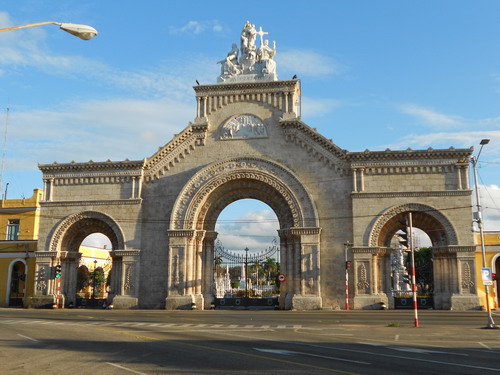 Its antecedent was the former Bishop of Espada Cemetery in 1806. A cemetery, which closed its doors in 1878. Seven years after the cornerstone ceremony of the current Cemetery.

As a curiosity I can relate that the ceremony took place on October 30, 1871, with the laying of the stone as a symbol of the start of the cemetery construction, in the place occupied today by emblematic portal known as the northern gate or portico of the Three Theological Virtues.

The new work that was being built was the brainchild of Spanish architect Don Calixto de Loire y Cardoso resident in Cuba. His project was chosen in the competition authorities of the island in 1870 called because of the need to design a new space for holy burial because of how small  the old Espada Cemetery was, a work that owes its origin to its founder, Bishop Juan José Díaz Espada Fernández y Landa.

It was in the year 1854 when the captain general Marqués de la Plazuela conceived the idea of building a new cemetery, larger and more functional than the Espada. From the beginning it was proposed to name the new cemetery for Christopher Columbus, it was thought that the remains of the very distinguished admiral were in the Santa Iglesia Cathedral of Havana after being moved from Santo Domingo, upon the Haitian Revolution in 1796.

The project, known, in Latin as Pallida Mors aequeo pulsat pede tabernas pauperum regnum que turres, by the Spanish architect Calixto de Loire Don, according to critics and experts of the time, was a real city for the dead. Loire’s work consisted in the beginning of two main streets that intersect at right angles to form a large cross that divides the rectangle into four quadrangles. We are reminded that the cross formed by these avenues symbolizes Christianity. The quadrangles or areas created by the main avenues were called by the orientation of the four cardinal points. These quadrangles reproduce the general plan, because they have in their centers streets wider than those in their interior, forming crosses called second-order, that joing the principal cross alluding, according to the architect, to the five wounds of Jesus Christ, at the time of his crucifixion.

The first work was the Galería de Tobías built, according to the records of the time, almost simultaneously with the items mentioned above. The failure of this mortuary complex became so evident that caused its closure in 1874. It is then decided by the Archbishop of Havana, to give permission for the famous vaults of the Archbishop to be built, with the sole purpose of compensating for the earlier loss. It is worth pointing out that the latter vaults are still in use.

The Current Colón Cemetery has an area of 56 hectares with 222 blocks, adding to this a total of 24.5 kilometers of streets and avenues and 35,000 square meters of green areas, the latter giving a touch of good taste to each of its arteries and enabling its visitors to contemplate a beautiful landscape. It is embraced by a perimeter wall adorned with cast iron railings completed by pointed balusters, extensive woodland, a general charnel house, the Central Chapel, two administrative buildings and four cardinal points entrances that allow access to different parts of the city.

The existing monuments recreate the work of renowned artists with different styles. True works of sculpture and architecture are waiting to be discovered within the perimeter walls of a place that bears the mystery of death.

In my usual walk I found not only the beauty of art, but reverence for the silence and peace that a place like this offers. With this article I share with you some of the main buildings and sculptures that stop me every time I go to this place, going from the artistic and the urban to the religious.

The Christopher Columbus Cemetery is one of the marvels of architecture treasured by the Cuban nation, and we are all its most loyal guards.