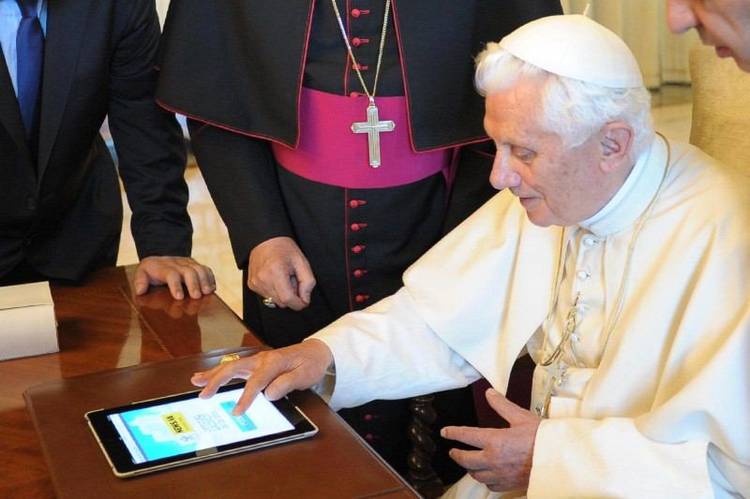 With just one click from his holy finger, he lit the most colossal Christmas tree in the holy world 220 kilometers from his holy dwelling. So says the Guinness Book of World Records: the tree rises 750 meters up the side of a mountain in Gubbio, Italty, and is a record And this tree was lit by Benedict XVI from Rome using a $500 Sony Tablet.

Thousand of my readers who are engineers could explain the mystery to me: how to implement a mechanism that, via satellite, lights far off bulbs with the single touch of a button on an electronic tablet. But one thing I do know from my own common sense: This mechanism is expensive. In spades.

His Holiness saw the result of his click on a modern LCD wide-screen TV. Perhaps he saw the image and thought to himself: “At this point, making miracles is a little bit easier.”

If he changed the channel and put some of the cameras in the Vatican, he could also see the Christmas tree that he ordered for the House of God, which will be lit this coming December 16th: it is a fir tree 5.6 meters high brought from the Ukrainian region of Zarkapattie and ornamented with 2,500 figurines in gold and silver.

This is not the most fascinating thing. That is what happened three days earlier, on December 4th, from his balcony facing the Plaza of St. Peter: the Holy Father exhorted his faithful to practice austerity this Christmas.

During the recitation of the Angelus, Joseph Ratzinger said that the Lord, “of riches he became poor for your sakes and he will make you rich through your poverty,” and he remembered the humble John the Baptist, whom Jesus himself admired above all those who “lived in the palaces of kings and wore luxurious clothes.”

When the absurd is too grotesque, there is only one reaction: silence. Perhaps a little introspection. For my part, I would dare to ask something of the advisors — or whatever one calls them — of Benedict XVI in these days of prayer and rejoicing: that they tell the Pope, if he ultimately goes to Cuba in March of this coming year, it would be a good idea to sell the Sony Tablet beforehand.

I know that the tithes only go from the faithful to the Church, never the reverse, but with $500 he could feed a lot of the mouths of my people, and by this date Christmas 2.0 will have already passed.