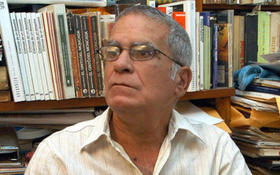 Oscar Espinosa Chepe was one of the best informed and courageous Cuban economists. Despite the difficulties to access the internet, he was always up to date on the regional and local [Economics] organizations’ publications; and his works were always well documented and objective.

His criticism was based on publications and official figures, but he also criticized the US embargo as an instrument that had failed to end the [political] system while being used as a scapegoat for all its economic failures.

To me, Chepe was always a source of inspiration, his articles are abundantly quoted in my own publications, and I had the honor of writing the foreword for two of his books.

When he came out of prison in Cuba, due to the bad state of his health’s, I was able to get two dozen prestigious economists from around the world to sign a letter to the Head of Government of Spain requesting his exit [from Cuba], but in the end  he decided to continue writing in Cuba.  He offered his life and his health for Cuba.

We met in person in Havana in 2010, and the tiny and modest apartment that he and Miriam inhabited surprised me; filled with books, magazines and papers, almost leaving no space for daily living.

He was a humble man, frugal and amiable, who loved his fatherland very much. I was able to see him in Madrid this past June and he was staying with Miriam in a tiny room of a hostel. Although already very sick, he attended the presentation of my book at Casa de América and I publicly paid him my last homage. We are going to miss him very much.