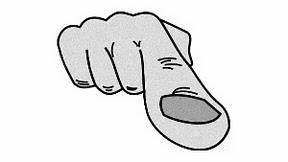 The scene opens with several friends sitting on any corner of Havana. They are talking, rather shouting, while passing a bottle from hand to hand. They are heatedly arguing about how bad it is out there; no one contributes a solution for a better way of getting by, and they conclude that the best way is to leave here for “…over there…?…” One of them comes up with a plan of escape. His friend listens to him quietly, takes him away from the group and brings him to a park, where they sit. He tells him:

Kid, when you’re depressed, don’t vent your frustrations in public. You don’t know who is who, you’re looking for trouble. Don’t say you’re going to take the boat to Regla to get the fuck out of here … or that you’re going to bomb the fucking Council of State so all the old people die! … watch out! They can punish you for illegal departure or for terrorism, which is worse. Remember the three black guys they shot for the same thing in 2003 … (His buddy doesn’t let him finish.)

Pal, that’s fucked. You know that when I have a couple of drinks I start talking shit…! But why, I’m not doing anything wrong. “Look innocent,” as they say here. “It’s a long way from words to action.”

I know, but your thinking is dangerous, and if someone hears you, he can steal the idea and develop it, and then accuse you of being the intellectual author, an accomplice or an instigator. Take my advice: in this country, to talk out loud about what you think or your hidden desires is risky. People will always listen and even give you rope, but at the moment of truth they will deny having eaten the cake and will throw you aside like someone to be shunned. I know that rum removes the pain, but I repeat, look, it’s not a joke, be very careful. He says this while insistently waving his index finger.

But how will they find out what I said?

Don’t be naive! For the courts, evidence from secret operations is sufficient. In this country informants multiply like fish in the sea. This is not like the CSI Las Vegas crime scene, where they need physical evidence to incriminate you. Here, just for moral conviction, you can get 20 years.

Don’t exaggerate, he says, with disbelief.

Be careful, you who go all the way to Mariano to get cheaper liquefied gas. Imagine the police stopping you and taking you in and pulling out your criminal record. All the fines for disorderly conduct, every time you pissed in the park after two drinks, arguing with an old Communist. These people have no solution, they’re eating dirt and will continue until “he” dies. But when you ask them to open their mouths, they talk your arm off. That’s a duty for them.

I know, pal, but they get on my nerves, he concludes with resignation.

As I was saying, here they know everything and at the same time know nothing. They get you angry, they can think that you’re doing something to destroy a strategic objective of the Revolution. I’m not trying to scare you; I’m just warning you. He again waves a finger in his face, while he looks to see if anyone is listening.

If that were the case, they would put everyone in jail. Do you know how many people are crazy to leave this country, or to blow up all this shit? No, and that’s not all. How many would kill themselves with bombs and everything, so that Cuba’s problems would disappear?

Don’t you know the story about the guy in the bodega who said he’d dreamt he killed Fidel? They sentenced him to not dream any more. Pal, there are thousands who think like you, but there are more who speak in whispers.

The curtain comes down; the show is over.