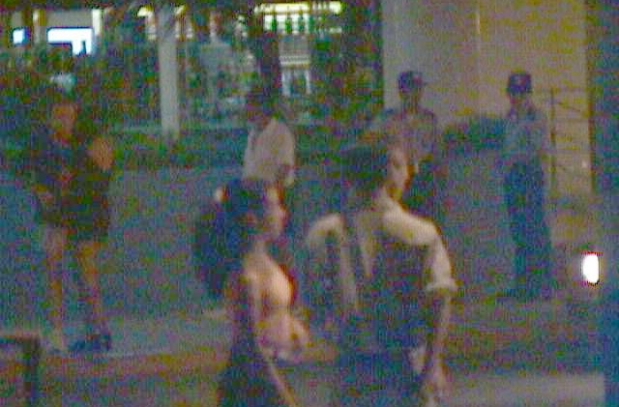 The original sin of the “Cuban Revolution” in relation to prostitution lies not in the fact of its not being able to eradicate it, a clearly impossible task, but in denying its very existence. Such a denial doesn’t only retard the search for solutions for social problems — sexual slavery, drug trafficking, child prostitution, the spread of sexually transmitted diseases like AIDS, etc. — that have appeared on the Island, but also prevents the population from having a clear perception of the issue and its social implications.

By excluding the issue from public debate it remains buried under less pressing emergencies related to economic survival and the precariousness of material resources. At the same time, these very privations accelerate the the deterioration of moral values, and feed the growth of prostitution, especially among teenagers under 18, who constitute the most vulnerable sector. A vicious circle that closes in on itself with a Gordian knot that seems to have no solution.

The end of innocence

While many adult women have chosen for themselves the path of prostitution, it is not less true that the entry of minors into the profession is ever more frequent. Eighteen marks the age of sexual consent in Cuba, but it is not rare to find girls between 13 and 17 who have already become prostitutes.

These kinds of activities, although prohibited by current laws, are difficult to detect due the complex web of illegalities that has been consolidated in the heat of impunity, and that now includes the networks of “recruiters” (generally older prostitutes and pimps), brothels — often protected behind the facade of a legal business, clandestine hostels, etc. — and, in some cases, with the complicity of law enforcement.

Police corruption, meanwhile, can be gross or subtle and ranges from simple extortion of the prostitute to the direct participation in obtaining monetary benefits under the concept of protecting the business; but in all cases it constitutes an important obstacle in combating this scourge.

According to the testimonies of several prostitutes, some police officers who cover shifts at certain key points in the capital receive direct payment from them, or from the employees of neighborhood bars, to permit both the trafficking of these sex workers as well as the clandestine trade in rum and cigars that is a scam usually played on unsuspecting foreigners. Prostitutes and bartenders have established a kind of mutually beneficial professional collaboration and have created true niches of corruption, particularly in poor areas of dubious reputation, such as Chinatown in Havana or San Rafael Boulevard.

The absence of institutions

In addition, some life stories suggest that the majority of minors who venture into the world of prostitution come from dysfunctional families and have grown up in hostile homes, both materially and affectionately, without there being any institutions truly responsible for their safety and protection.

A sample study conducted with a group of young prostitutes between the ages of 15 and 25, allows the conclusion that almost all of the cases came from dysfunctional homes, that prostitution among minors is a growing trend, and that the representatives of the repressive bodies or the courts are the only representatives of any official institution with which they have had any contact or relationship, whether it be to be blackmailed, arrested or punished; but never to offer them an alternative life or to enroll them in some social program that allows them to overcome the serious existential conflicts facing them.

Some of them are completely lacking in family support, others have minor children, are school dropouts, have used drugs at least once, and/or smoke and drink alcoholic beverages regularly.

The issue is compounded because it appears that there is no national program, nor even a local one, charged with supporting those who, given their particular circumstances, have taken to prostitution as a way to solve their material problems, not even for those who have lived in conditions of extreme poverty and lack of attention in dysfunctional homes, those who have been abandoned by their families, or for those who have been systematically abused, including by their own close family members.

Such helplessness is even more inexplicable given that, for over half a century, the Government has developed organizations dedicated to “surveillance” on every block through the so-called Committees for the Defense of the Revolution (CDR), or to the needs and defense of women through the Federation of Cuban Women (FMC). An institutional structure that, had it functioned in the social interest or fulfilled its founding principles, would have been capable of controlling this evil from the beginning.

Neither the Government nor independent civil society

Even though the problem of child prostitution potentially affects thousands of families, it does not seem to arouse significant interest on the part of the Government, largely responsible for the fate of so many frustrations; the same Government whose educational system, for decades, has robbed parents of their authority and awarded the “paternalistic” State custody of children, teenagers and young people, now abandoned to their own bad luck.

More worrying still is that not even within the alternative spaces is there a particular interest in this matter. In any case, a debate on the topic is not emerging, nor are there civic proposals that take it on, to any extent, from independent civil society. This suggests that perhaps there is an underlying accumulation of moral prejudices or traditional taboos that prevent the same sectors which have opened spaces for questions as complex as racial discrimination or sexual diversity, from taking on the challenge of the debate about prostitution and its social effects.

But far beyond the lack of resources, what is really alarming is the apparent lack of political will within all parties to approach one of the most complex issues that Cuban social reality is facing in the near future.