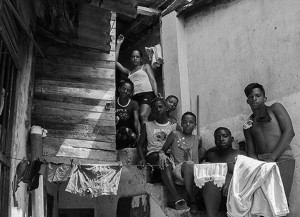 HAVANA, Cuba , September, www.cubanet.org – For ten years, the issue of housing has topped Cuba’s social problems. The state, unable to meet demand in the medium and long term, commits to offering its abandoned and unrepairable properties. Families of victims, calling on their meager resources and their own efforts, are divided out among warehouses, factories, schools, offices and even in abandoned police headquarters.

Offices of an old abandoned factory in danger of collapse, located in Cuervo road in the Havana municipality of Arroyo Naranjo, were previously assigned, provisionally, to three families of victims. In the warehouse of the dismantled La Ideal cannery, in the capital municipality of San Miguel del Padron, shelters other families by whatever means possible. The San Francisco de Paula railway station, in the same municipality, has served as a “temporary” roof for three families since the end of the ’90s.

These spaces donated by the State already existed, to a lesser extent, before 2006, the year that Fidel Castro delegated his powers for reasons of health. Already since 1996, part of the International School of Sports and Physical Culture (EIFD), in the Cotorro municipality, was enabled for dozens of victim families to temporarily stay overnight. These families and their descendents are still living in EIDF.

Transition communities like Gambute, Mantilla, El Comodoro and Martín Pérez, all in the capital, have been operating for more than fifteen years.

According to the ousted vice president Carlos Lage, 2006 ended with 111,373 housing units built, 78,833 more than were constructed in 2011 (32,540). Data provided by the National Housing Institute shows that Cuba must build between 60,000 and 70,000 housing units. However, the State is building some 16,000 while between 8,000 and 10,000 are built through private efforts. The State insists that its priority is to “solve [the problem of] those sheltered because of collapses.”

Does Havana, receiving more than 20,000 new residents each year, especially from the interior of the country, record in its annual housing construction plan the spaces and “transition communities” that are offered each year to victims and social cases? Looking at the nationwide housing stock of more than 3 million units, according to the National Statistics Office (ONE) 61% are in good condition, and the rest are “regular” or “bad.” Annual demand is predicted to be twice the plan figures for construction and repair of housing units.

Oris Silvia Fernández, president of the National Housing Institute, interviewed for the new news show “Cuba says,” argued, “We have a very complicated situation in the country’s capital because we have 5,471 families in shelters, and we have to say that there are other families who live in critical buildings with rather complicated structural situations in the capital, and we are talking of a total requirement of 28,000 homes.”

According to the ONE, the Cuban capital has more then 6,000 tenements and former mansions and old houses subdivided into rooms, plus 46 shantytowns — among them the transition communities — on the periphery, where more than 18,000 people live. All of them, and the new generations that come along, have been waiting for more than twenty years for dignified housing. However, statistically, are these cases resolved by the government?

For the long list of victims, offers of land by the State do not seem to be on the table. And despite Decree Law 217 (1997), which regulates the flow of migrants to the capital, the arrival of emigrants from the eastern part of the country increases the total housing needs in the capital.

Hurricanes and tropical storms over the last ten years have affected more than one million homes. Hurricane Sandy, which hit eastern Cuban in October 2012, most affected the provinces of Holguin, Santiago de Cuba and Guantanamo, causing the complete destruction of 22,396 homes. As of the first half of the year, 20,710 remained unaddressed. From previous cyclones — I’m referring to Gustave, Ike and Paloma — 40,000 totally collapsed homes remain unaddressed, according to Silvia Fernández.

The eastern province of Santiago de Cuba has a housing stock of 329,191 homes, with 40% in fair or poor condition. With this as a starting point, Hurricane Sandy affected 171,000 households, and only 44% of the victims have resolved their situation.

Given the low production of materials and a government program to build housing that does not exceed 20,000 annual units, temporary solutions appear necessary  It remains to be known if this is a permanent state.