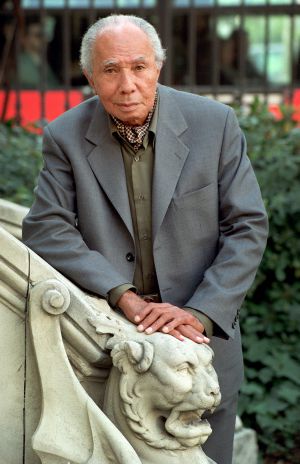 Cesar Portillo de la Luz (La Habana, October 31, 1922), one of the kings of Cuban music, has died. He departed this world but he left behind his songs and a guitar widowed from arpeggios and creative harmonies. He crossed the threshold of “feeling” into the light of immortality alongside other greats such as Jose Antonio Mendez, Frank Dominguez, Nico Rojas, Frank Emilio, and Aida Diestro, through Elena Burke’s voice. His art converged the melancholic equilibrium of guitars with emotions born from the genre, which marked a time of renovation in Cuban music. Our Cesar, one of the creators of “filin,” took Rebeca, his first stringed wife, and taught a generation and many musicians that one could compose and accompany the feminine instrument – evoking its forms – and he left behind to the history of Cuban music great hits such as Tu, Mi Delirio, and Contigo en la Distancia, or Realidad y Fantasia, works that earned him international fame.

His bohemian soul knew full well his (our) nocturnal Habana that he sculpted and immortalized in the notes of Noche Cubana. I know that he has not hung up his guitar, as some might think, but rather he left her waiting, hung in the walls of all the nightclubs in the capital city, through the multiple voices of interpreters from all regions and cultures and through all the phonographs that play his songs. Just in case, and in honor of our teacher, I will leave his melodies playing in my sonorous memory so that every time I come back to his raspy, fresh voice and his sober, serious image to delight myself with, I can imagine him there, in the eternal international musical scenery of the great.