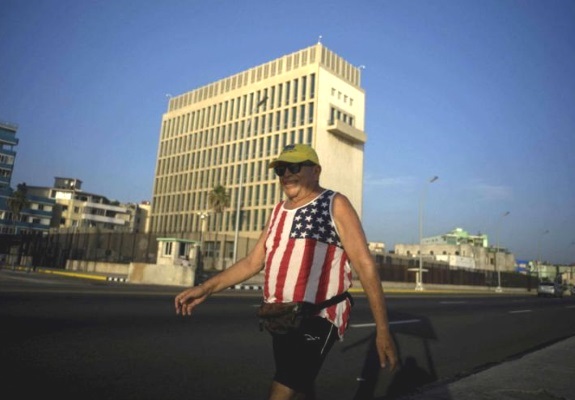 Cubanet, Miriam Celaya, Havana, 10 August 2015 — The digital version of Cuba’s most official newspaper, Granma, has once again published an article harping on the issue of nationalization of businesses and other US properties in Cuba which took place in 1960.

A few weeks before, the same lampoon had made reference to the matter, which, curiously, is one of the items on the agenda currently being negotiated by the governments of both countries.

The insistence on the subject should not be random, though it is inconsistent if we take into consideration that the public event that transpired 55 years ago, in front of a delirious crowd that filled the Estadio del Cerro, when Castro I – along with his younger brother, current negotiator General-President – proclaimed, microphone in hand, possessed by his own soul and by force of populism, the Law that in one swift stroke expropriated some thirty properties belonging to “the Yankee imperialism.” The very same “imperialism” (or could it be another?) that the very same old Cuban government (and no other) is crying out for, without mediating explanation for such a radical reversal.

In fact, now the ‘villain’ is being offered a welcome with privileges: if in 1960 US companies coexisted in Cuba with majority private property of domestic capital, the impending return of the vilified Yankee capital would enjoy rights that Cubans do not have, since the latter are excluded from the possibility of investing in their own country.

However, the elders of the Palace of the Revolution insist that “we have triumphed over the Empire” and that we are “more sovereign and independent” than ever. That is, US companies are now welcome in Cuba, not because the structural crisis of the Castro regime has become insurmountable or because the absolute ineptitude of the Castro saga to even manage the wealth that was seized by spurious laws has plunged the country into poverty, but because the ‘imperialism’ has finally become reasonable after being symbolically beaten for over half a century “by the resilience and revolutionary convictions” of this people.

Thy dollars cometh onto us

Nothing shows Cuban deterioration as much as the artificial glorification of the past. Unimaginative and lacking in political capital, old revolutionaries continue to choose to appeal to an epic nobody is interested in, except the morbid curiosity of a globalized world that views the Island as a Jurassic stronghold of the Cold War that includes species that are extinct elsewhere, such as dictators satiated with impunity and people who are as meek as sheep.

However, despite the verbal energy of Granma’s writers, General-President Castro II seems to have forgotten his impromptu speech on that July 6, 1960 afternoon, when he took advantage of his older brother’s momentary loss of voice to show off his vocation as unrepentant lackey in all its splendor, and to improvise a little snack of exalted mystical inspiration, praising the virtues of the leader in his conquest of “glory that belonged to only him” and in addition proclaiming “our America” as the “true one.”

It was at that event where “Cuba sí, Yankees no” was born, the famous slogan that the most hardened ventriloquists of the vernacular flock were bleating until just yesterday.

Now, when it’s clear that the fiery leader of the past is not eternal, and when the octogenarian heir to the estate-in-ruins gazes at the fields overrun by the invasive marabou* weed covering the landscape of what was once an orchard, it seems that, beyond the official discourse designed to please idiots, the “real” America is no longer “ours,” but the one that rises north of the Rio Grande.

Everything indicates that the following also ceased to be: “the duty of the peoples of Latin America must be to tend to the recovery of their national wealth, removing them from the domain of monopolies of foreign interests that impede their progress, promote political interference and undermine the sovereignty of our peoples.” It just so happens that new times are in effect, where foreign capital has mutated, from onerous for the people to advantageous, even for this anti-imperialist Island-lighthouse-of all the Americas, where the same politically immutable old leaders remain attached to power, gobbling up the nation, as if they were lampreys.

This is why the official press becomes increasingly improbable, to the point of mimicking the plot of a Latin American soap opera, the kind where “nice” characters spend their lives suffering ridiculously from the first to the next-to-last episodes, to end up happy and forgiving “the bad guys” in the final episode.

The plot of the soap opera-lampoon offered by Granma, where once there was an enlightened leader followed by his people and where crowds foolishly hailed the foreign plunder without realizing that this is the best way to legitimize their own, aims to insert that shameful past in the context of reconciliation between the spurned lover (Cuba) and the feckless lover (the United States) who returns for the re-conquest, always convinced of his power of seduction

But, at the same time, the lover-victim of so many excesses and cruelties by the faithless lover feels she must prove to the native audience that, once she falls again (into the arms?) of the irresistible charmer, she does not commit a sin of weakness, or better yet, of imperative need for survival, but that – quite the contrary – this an unquestionable proof of her (“our”) political and moral superiority.

At any rate, the leap turns out to be at least counterproductive. It is as absurd to try to attract foreign capital on the one hand and to shake the memory of nationalizations that undermine this capital on the other. It could be stated that two governments and two parallel strategies exist in Cuba, and if any revolutionary has survived, it might be creating a regrettable confusion for him.

The current olive-green deputies of mass manipulation should consider not only the ambiguity of the discourse, but – at the level of farce that they have chosen – understand that many consumers prefer negative soap opera characters over heroes and heroines. They assume, judiciously, that it is preferable to enjoy oneself most of the time and to suffer only once than the other way around. It is not by chance that the only thing that is growing in Cuba at such leaps and bounds as apathy or uncertainty is the number of people fleeing the glorious national poverty to benefit from the evils of imperialism. They have chosen the villain.

Meanwhile, inside Cuba, and without speeches from the grandstands, the xenophobic slogan of the popular romance years with the olive-green hero (Cuba sí, Yankees no) has changed radically. Today, the island is awash in American flags and the most vilified symbols of the American way of life; the slogan is now “Cuba yes and Americans too.” And if our revolutionary glory days of the past are good for one thing it is to mourn the irreparable loss of these 56 years of suffering between capitalism and capitalism.