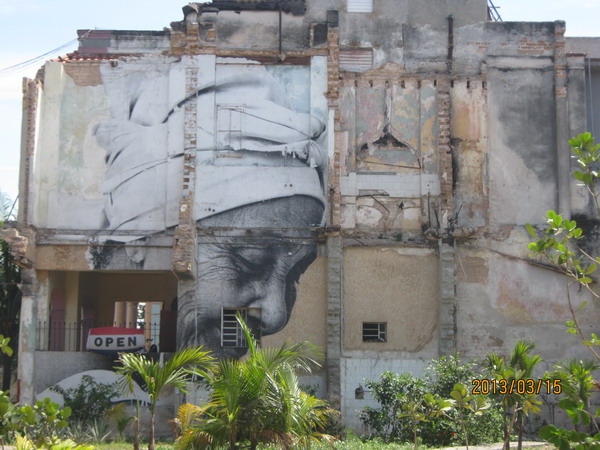 Now, as the 2013 Art Deco Congress is being held in our country, and invitees and delegates attend its conferences, an average of three residential structures a day collapse in the capital.

The influence of Art Deco, which dates to the 1920s and 1930s, was strongly felt throughout the world in the decorative arts, painting, fashion, sculpture, cinema and graphic design.

The most emblematic architectural example in our country is the Bacardi Building, constructed from 1930 to 1938. The Cuban architects Esteban Rodríguez Castell, Rafael Fenández Ruenes and José Menéndez oversaw its design and execution. It is considered by many to be their masterpiece and fortunately remains in a very good state of preservation.

Examples and remnants of this movement proliferate throughout the city. Among them in the López Serrano Building – a beautiful example of this style, a structure of elegance and a striking design – which has been plundered and abused as a result of neglect and apathy on the part of government officials. It is at risk of being lost if urgent measures are not taken to address these issues. Other examples include the América, Fausto and Arenal cinemas, all in peril as well.

In health care this architectural style finds expression in the América Arias infant and maternity hospital by the architects Govantes and Cabarrocas. A beautiful example of Art Deco, this building has also been abused and it too is in danger of being lost. There is also the Pedro Borras children’s hospital, which has been closed for more than two decades due to structural problems, no doubt caused by nearby explosions during the construction fever of 1980s when tunnels were being built all throughout the city as part of the “War of All the People” campaign. At the time of its construction this facility was the largest example of this architectural style, larger even than similar examples in the city of Chicago.

In terms of military buildings the Moncada Barracks in the city of Santiago de Cuba is in a very good state of preservation indeed.

During a wonderful presentation called “The Havana of Today and Tomorrow” yesterday afternoon in the House of Green Tiles in Miramar, the architect Miguel Coyula employed the term art-kitsch-tecture (one he coined himself) to refer to monstrosities produced by people with resources but without the slightest amount of taste who have managed to build new homes or remodel those they already own. In other words, something horrendous.

One of the issues that most caught the attention of those present was the extremely high proportion, close to 90%, of owners of homes, but not of the buildings, leading to the term “no man’s land.” The building has no owner, therefore mo maintenance or services. Every resident solves their own problems however they can, and this further accelerates the deterioration of the building. In addition, there is the increasingly rampant individualism. “To own does not mean to maintain” the speaker said. The owner of an apartment whose salary is 300 Cuban pesos a month, cannot invest 45% of that to buy a gallon of paint.

Another of the most important reasons for the deterioration of the city, according to Coyula, is the aging of the population. The emigration of young and well-educated people, as well as the migration to the capital of residents of other provinces who, for the most part, are not well-educated and who come mostly for economic reasons and settling wherever they can regardless of the conditions, has significantly increased the number of slum neighborhoods and favelas.

This is the current landscape of a greatly overpopulated city; what will be its future?