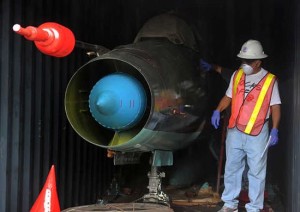 I have been to Korea a couple of times and the memory of it feels like a weight on my chest. People there work from sunup for a monthly salary that only gets them through a week. They do not know what the internet is and have never used email. They arrive punctually for political rallies and applaud mechanically, as they have been taught to do since childhood. When they leave, they look as though they feel they have wasted their time. They disparage American imperialism and capitalism but seem to have a certain envy of people from there, with their mobile phones and brand-name shoes.

That is Korea. In the hills fourteen kilometers north of Mayarí Arriba in Santiago de Cuba there is a little house belonging to Empresa Forestal Sierra del Cristal filled with men subject to the same gag orders and shortages as their counterparts in North Korea, where our arms are being sent without consent from us, their owners.

People in North Korea do not need to import more armaments. They already have enough — nuclear ones too — and they are not being brought in to make them happy. Like us, what they need besides the essentials of life are to have the tools of freedom put in their hands, not in those of the huge state which wastes them on surveillance.

These include computers, cell phones, flash drives, photo and video cameras, satellite antennas for internet and television, books and manuals on digital technology, human rights, peaceful resistance, a free press and civil society. They need access to Twitter, Youtube and Facebook so they can learn to publish whatever they want. They need roundtrip tickets to anywhere, to learn and bring about their hopeful ideas about the reality of their twin brothers in the south who enjoy an excellent standard of living.

Because Cuba’s foreign policy should never be that of “happiness now in your own home.” As we become more free as people and more prosperous as a nation, Cuba should not forget all the people in the world who are going through things as bad so bad as we are going through. Human solidarity, at the end of the day, is what has been preached for 50 years in our schools and media, though not always with peaceful, innocent or disinterested intentions.

Cuba and the world need to change a great deal. The humble workers cutting timber in the Korea of Crystal Mountain, where I got the traveler pretext for this article, deserve a better life. The North Koreans of the peninsula, which have similar scarcities, too.

And we Cubans need better international politics, one that in addition to looking after ourselves, also includes solidarity with all human beings who are down — regardless of their flag — with the oppressed, not with the little men clinging to eternal and total power: some day our shops will carry internet and computers and books, instead of hidden arms. Some day.