Cuban writer sends message to the attendees at the CELAC Summit.

Ángel Santiesteban, sentenced to five years in prison, asks the leaders invited to the meeting to not convert their visit into an act of support for Raúl Castro’s regime. 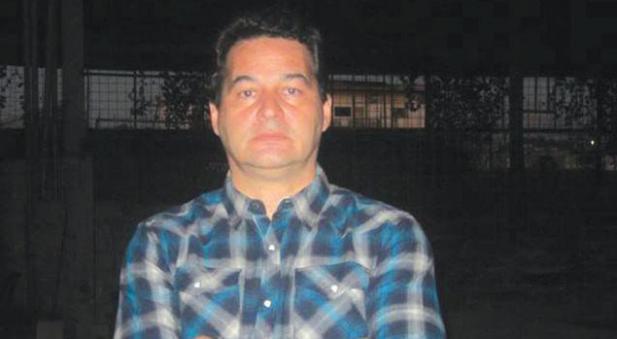 The writer Angel Santiesteban is sentenced to five years in prison (Cortesía).

The Cuban writer, Ángel Santiesteban, sentenced to five years in prison, asks the presidents and international political figures invited to the Second Summit of the Community of Latin Amerian and Caribbean States (CELAC) in Havana, that they not convert their visit into an act of support for Raúl Castro’s regime.

“The Castro brothers have been the most skilled manipulators in the hemisphere. Their political astuteness has kept them in power for more than half a century. To support relations with the dictatorship is a shameless act that the attendees will add to their curriculum vitae,” Santiesteban declared, in a message sent from the Lawton Prison Settlement in Havana.

Santiesteban, one of the most prominent contemporaneous writers of the island, affirmed that Cubans could never resolve their internal problems by way of civic protest, since any popular demonstration would be suppressed in hours, as happened on August 5, 1994.

“We don’t have the possibility nor the way to decide our future. All of us who have taken this step find ourselves in prison or obligated to abandon the country,” the intellectual pointed out.

Santiesteban, 48 years old, was condemned under charges of “violation of domicile and injuries” against his ex-wife in a controversial judicial process. He entered prison on January 28, 2013, and since then has gone on hunger strikes to protest the conditions of his detention and “a fabricated trial.”

“My crime has been to write what I think about Cuba and its dictatorship, something that I’m not going to stop doing,” said Santiesteban in an interview granted from prison to Diario Las Americas.

A few days ago, several officials violently ransacked his cell, since they presumed he could be preparing to make a statement to the foreign press.

During the search, they confiscated the magazines and books they found, among them the Universal Declaration of Human Rights, the by-laws of Amnesty International and a story that he hadn’t finished writing.

Although other Cuban intellectuals have been interested in his case, the government continues to keep him isolated “hoping that they forget about me.”

During the beating that a group of agents from State Security gave him before he was sent to prison, one of them warned him that he could have something happen to him like the opposition leader Oswaldo Payá, who died in a controversial accident in July 2012.

“When you get out of prison, you could die as if it were an accident,” Santiesteban remembered an agent warned him while they were beating him in November 2012.

That year Santiesteban also wrote an open letter to Raúl Castro, in which he accused him of intensifying the repression against the opposition. Days after sending it, they charged and condemned him for the supposed crime of domestic violence, which under a normal proceeding would have been sanctioned only with a fine.

“Since I began my blog they always told me to give it up and occupy myself with literature. As I didn’t stop, they fabricated a case of domestic violence in which they alleged that I entered the house of my ex-wife, the mother of my son, to beat her. They used false witnesses, hoping to silence the true reason they were prosecuting me, which is my dissidence,” argued the writer.

Intellectuals, activists and human rights organizations have requested that Amnesty International recognize Santiesteban as a prisoner of conscience, but up to now the organization hasn’t responded.

However, he considers that “something strange has happened.”

“I don’t know what purpose those lists serve,” he declared. “Except to support a cause and offer cover to someone in the claws of a totalitarian power, to more or less assure his life.”

He remembered that two days before going to prison he received a call from Amnesty International assuring him that they recognize his cause, but that they couldn’t add his name to the list until he was in prison. Later he learned that someone in Cuba had bothered to puruse it, because the organization had placed his name on the list of political prisoners without consulting him.

“However, it doesn’t make me lose sleep. I can’t turn back from the road I took. Everything started when I expressed ideas that were adverse to totalitarianism. My crime has been to think differently.”

To reveal the falsity of the judicial process they planned against him, Santiesteban used the collaboration of a friend who pretended to be a prosecutor and demanded that the false witness tell her the truth about what she maintained about the accused.

“The conversation with the supposed prosecutor was recorded,” he said. In it the witness confesses that she had been pressured and bribed to testify against me.”

He described that during his presentation in court, searching for arguments to condemn him for the supposed maltreatment of his ex-spouse, they ordered him to write a sentence extracted from the newspaper Granma (the official organ of the Communist Party of Cuba).

“After analyzing my handwriting, a proficient calligrapher dressed as a soldier certified my guilt, saying he found a certain inclination and a suspicious size in my letters. It would be a joke if I weren’t in prison,” he commented.

Six months ago, the request for review of the case was delivered to the Minister of Justice, where they allege that the documents have been lost and that they don’t know who removed them. Recently the attorney who represents Santiestbean discovered that some of the documents had been extracted from the file.

“The regime is hoping that they will forget about me, in order to kill me later,” reported Santiesteban. “They’ve threatened me with that on multiple occasions,” he pointed out.

Ángel Santiesteban, a victim of the repressive politics in Cuba

The Cuban writer is in the Lawton Prison Settlement, in Havana. 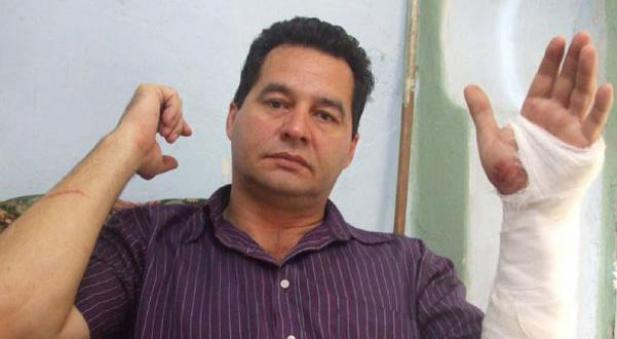 Destroying the image of their political adversaries is a tactic of regimes that want to control the masses. The same as the Nazi ideologues, who achieved the manipulation of the minds of million of followers, totalitarian governments like the Cuban one use the method to destroy the figures who oppose them.

Ángel Santiesteban, winner of various Casa de las Américas prizes and winner of such prestigious competitions as Juan Rulfo and Alejo Carpentier, is recognized as one of the strongest voices in contemporary Cuban literature. However, his decision to dissent and to dare to question the repressive methods of the regime and open up through his blog on the Internet, which he considers “a space for constructing free thought,” implicated him in a judicial trial, after which he ended up being condemned for a common crime.

After a rigged trial, the prosecutor came forward with an order of 15 years of privation of liberty against the intellectual, who was accused of rape, robbery and attempted murder against his ex-spouse, the mother of one of his two sons, and they also prohibited him from approaching her for two years.

In these moments, the writer is in the Lawton Prison Settlement, in the Cuban capital. From one of his cells, thanks to the collaboration of activists inside and outside Cuba who support the dissident, the photos of Santiesteban behind bars accompany as graphic testimony the interview he granted to Diario Las Americas.

The five years of prison he is serving, according to the figureheads of power, are intended to make him desist from his interest in writing about the truth, but the same declaration of principles published by Santiesteban while he awaits sentencing define exactly what he has chosen as his lifeline.

“Since I undertook my journey with the blog, I felt the energy of a liberty that I didn’t know. And once it’s tried on, now it can’t be missed. It’s as essential as oxygen itself.”