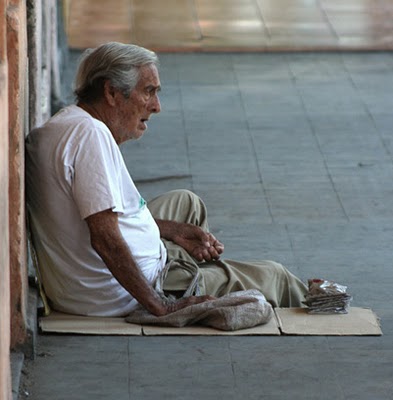 ALL ABOUT MY FATHER

My father didn’t beg for alms, but depended on a brother and another son in the USA. My father had to go out into the street to sell a little packet of anything, even though he gave English classes at home like a horse. My father lived at home until he was 81, when he was already practically just the father of my mother (17 years separated them). My father, the grandfather who never had a “grand.”

Every day I return from the street with my father in the Canon camera and my head burned by the sun and so much loneliness. I took almost no photos of my father when he was alive. And now I am paying the price of this adolescent neglect (I was the son of his old age).

So I find him on the Cuban sidewalks and porches. Gasping, badly shaved. With humble clothes that always smell of Populares cigarettes at 1.60 pesos (a strange aroma: all smokers stink, except him). A guy so affectionate, when I would dare to say half a word to him. So clumsy with practical things, so deluded by useless writings. Of an immortal look when my psycho-rigidity would allow me to say, from time to time (from voice in time): papá…

He died in August, as everyone dies in this noxious Tropical month. Of cancer, as befits a country with no cutting edge diagnostics. Nor therapy. All of a sudden, fortunately. Without pain. My father died of a merciful metastasis, amateur, between a rare vomiting fit of so-called “coffee grounds” and the ballads on Radio Martí, on a Selena radio before the Special Period.

Since then, I’ve seen him many times and always photographed him. I never talk to him in the street. But at home, I do. Always. ¡Papá, coño, if it’s all the same…! Papá, ¿is it true that you are never going to die again…?

My mother ignores all this traffic in emotions. She waters his flowers every day. Cuts off their heads with the punctuality of an executioner. My mother is a terror with the shears in our garden. And she prays for my father, with the timidity of someone who is getting old and still doesn’t know if she has the right to pray (solicitous servant in capitalism, mute worker in communism: my mother did know how to resist).

There s no consolation for not seeing my father, I suppose. But I invented one when the socialized sadness of Cuba wouldn’t stop. Then I search through my photos of street knights fallen in the uncivil trenches of Havana, feeling on the liquid screen and the chrome paper the marvelous myopic eyes of my papá. Even that WOW!, here he is again, like new, photographed as if he hadn’t died exactly ten years ago. The days will return.

And I’m glad, like a stupid student, that my father never asked for anything from strangers, neither in the crisis nor in the splendor; I applaud that his little businesses were a calamity without earnings because he didn’t need them.  I delight and envy that in his 81 years he didn’t know a doctor except the naive and ignorant native who only discovered his cancer during the autopsy (just like since I was a kid I know that after the Zero Year or two thousand I would be left orphaned even of Cuba).

It was a Sunday. Thirteen. In August. With Little Pioneers on TV bringing the first flowers for comrade Fidel’s birthday that day ( ). That night, the Luyano funeral parlor (dim little premises with a republican plaque of the People’s Socialist Party) was more crowded than ever with old people left along to face the thin reality of the island’s 21st century (insipid night, improbable gardens). And right there I became to feel some deadly pride that my father wasn’t there.

Good evening again, false papá with emphysema in these pixels of today. You who are resuscitated in the next photo and soon breath your next flower (it seems like a terrible title from Manuel Cofiño, but the life of my father, somehow antipodean, was this stylistically). Until tomorrow then, forgetting of my papá (it’s a privilege to write, finally, without complexes these loose little phrases from primary school). I suspect that my grammar will not return. Rev in Peace!