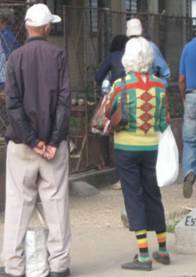 Two pieces of news attract my attention these days: Cuba’s draft resolution against imperialist politics to be presented to the UN General Assembly today October 29, and that Cubans is among the top in the world in gender equality.

The first is repeated every year, updating the supposed damages inflicted by the blockade (the embargo) on Cuba. Now, after meticulous mathematical calculations of the various agencies and institutions, which have been published daily in the newspaper Granma, the figure rose to $1,157,327,000. It is striking how well the government economists can calculate the figures for the supposed damages of the blockade (the embargo), and yet have never been capable of calculating the damages from Cuban mis-governance, with the errors, improvisations, voluntarism and failures, that they have inflicted on the country over the last 54 years.

This shifting of the blame to another and laying all the responsibility for our misery entirely on their account is repeated every year. It’s beyond belief!

The second makes me laugh: that the World Economic Forum (WEF) makes this claim, putting Cuba in fifteenth place in gender equality globally among 136 countries evaluated because it has a high percentage of women in its parliament, shows how superficial they are.

The Cuban Parliament is a parliament in name only: all that its male and female deputies do — meeting twice a year for three days — is unanimously approve government decisions that, as a rule, have already been implemented before this formal approval. These deputies have nothing to do with those of other countries and are completely useless, simply members of the chorus.

It would be nice, before making this absurd claim, to ask our women about gender equality. Gentlemen of the WEF, please, a little more seriousness.