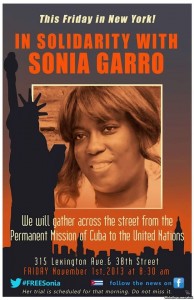 The regime suspended the trial scheduled for this Friday against Lady in White Sonia Garro Alfonso, her husband, the activist Ramón Alejandro Muñoz González, and the dissident Eugenio Hernández Hernández, according to members of the internal opposition in Cuba.

The veteran opponent Vladimiro Roca told DIARIO DE CUBA that he talked to the opponents’ lawyer, Amelia Rodríguez Cala, who confirmed the suspension.

“Sonia Garro’s attorney told me the trial is being postponed,” activist Antonio Rodiles said in his Twitter account.

Roca sid the postponemnet of dissident trials is not unusual. He said as often happens in these cases the court did not elaborate nor set a new date.

The prosecutor asked for 10 years for the Lady in White, 14 for her husband, and 11 for Hernández Hernández.

Speaking to the press, Rodríguez Cala has said the charges against the activists are not legitimate and the sanctions asked for by the prosecutor are “excessively severe.” Roca said the attorney would seek the release of the dissidents.

Yamilet Garro, sister of the Lady in White, told DIARIO DE CUBA that she was able to visit her on Thursday in Guatao prison, where she is being held.

“She’s in good spirits, although very concerned for her daughter,” a teenager, she said.

The trial against the activists was to be held on Friday at 8:30 am in the Diez de Octubre Court in Havana.

The three opponents were arrested in March 2012 in a violent incident in which authorities used special forces and rubber bullets. Sonia Garro was wounded in the leg.

In the year and a half they have been in prison, both Garro and her husband have been the victims of beatings and other punishments by the authorities and common prisoners encouraged by them. Both have been in isolation cells.

On Tuesday Yamilet Garro said her sister suffers from a kidney infection for which she is not receiving medical care. Sonia Garro also suffers from a serious skin infection that has not been cured.

Activists and family members have repeatedly requested, without success, that Amnesty International declare the opponents prisoners of conscience.