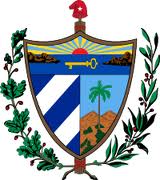 While in Cuba and almost anything is possible, it produces confusion to try to buy a flag and the national emblem in your own country and to find there are none in the shops, nor do the libraries offering representations or posters or patriotic symbols, nor even the books on the subject.

Meanwhile the market is saturated with pictures of Che Guevara, even embedded within the national emblem. The fact remains that Che Guevara is liked by most of the Cuban people, however the situation, in my opinion, is outrageous.

Symbols are learned by children from the time they are small. The flag, the national emblem, the anthem … Together they form part of the identity of a nation. No wonder the image that is used to represent the Constitution of the Republic of Cuba is the shield of the royal palm, the national tree.

It is worth emphasizing the Law of Laws of the Republic of Cuba, Chapter I, Article 4 where it states:
“The national symbols are those which have presided, for more than a hundred years, over the Cuban struggles for independence, the people’s rights and social progress:
The lone star flag;
The anthem of Bayamo;
The shield of the royal palm.”

I will never tire of repeating that for years UNESCO and UNICEF have promoted: “The quality of early childhood education is essential for the development of a country.”

Although brochure No. 6 for children of two to three years in the “Educate Your Child” program don’t mention patriotic symbols, the toddlers become familiar with them inductively, by their constant presence in the nursery, private or otherwise, which will help to facilitate their further understanding of their transcendental meaning. The most important thing is to protect our identity and pass bit by bit to the smallest.

The pride of being born in Cuba, is not limited only to being generous, playing baseball and dancing well. To have in a Cuban home the flag and its shield is not only a right, it is a need in these hard times being experienced by the country.

The tourist or Cuban who wants photos of Che can buy them. Cubans also want to buy Cuban flags and shields of all shapes and sizes. I guess my opinion does not matter … but if you are interested, here it is:

Absolute Cuba: More Cuban flags and shields and many preschoolers who, before going to school, harmoniously sing the national anthem.