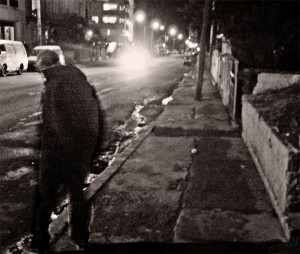 Sometimes we say, “What happens to me does not happen to anyone else,” without actually measuring the real possibilities of an extraordinary personal event being unique in the world. But when I heard the story that I now share with you I was, in fact, struck dumb. Not only by the strangeness of the situation, but because, once again, it made me feel like crying to see the state of alienation (using the language of Marxism) that a communist society can bring an individual to.

He was sitting at the stop waiting for the bus to Playa when an old woman begged him to accompany her to Calixto García Hospital.

“Son, please, I can’t walk and I have a doctor’s appointment.”

Going in the opposite direction for altruism is typical of noble souls, and he, well, he is one. Abandoning his own journey, he stopped a taxi on Linea Street and got in with the old woman, headed to 27th and G in the Vedado district.

Along the way she told him that she was alone in Cuba with no one to care for her, that social security had reduced the money allocated for her medications, that she was sick and as she got older she was sinking into a deep and devastating poverty. She had asked for a social worker to look after her, but it was a long process and nothing had yet come of it. He, silent, listened helplessly, feeling a heavy responsibility on his own shoulders.

They arrived at the clinic. Feeling so sorry for her deplorable state, they let her go to the front of the line. He stayed with her so that later he could take her home. As the minutes passed they began talking with the other sick people and to the complete stupefaction of the hero of this anecdote, the victim exclaimed:

“It’s true that we lack many things. But Fidel has never abandoned us!”

Her voice ragged and breaking, she devoted the last moment of the wait to praising this man, and when they finally called her they discovered her appointment wasn’t there and she would have to come back to see another doctor. He, still silent, walked her to another taxi and paid the driver to leave her at the door of her house. Before the car pulled away he told her,

“Madam, before we say goodbye I would like to let you know that I am a dissident.”