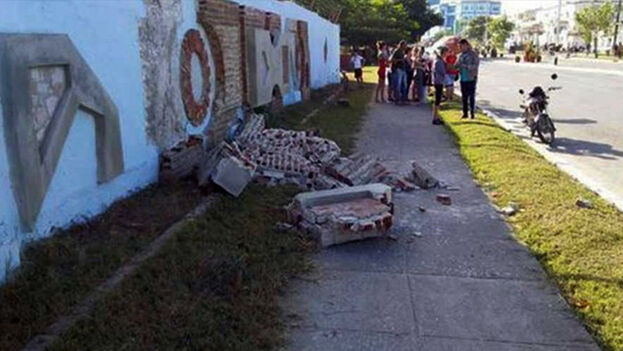 14ymedio, Havana, 10 January 2023 — Pre-university [high school] students Javier Enrique Pino Burgos and Manuel Enrique Cancio Amador have been hospitalized since January 6, after a wall mural collapsed in Sancti Spíritus and fell on top of them. Both of them, like another young man who was also injured, were taken by surprise by the incident while they were waiting for the Freedom Caravan to pass, which recreates Fidel Castro’s journey to Havana in 1959.

Because Cancio Amador required specialized care due to the multiple trauma’s he presented, he was taken and admitted to the José Luis Miranda Provincial Teaching Pediatric Hospital in Santa Clara. Balsaín explained that the patient underwent a “nuclear magnetic resonance of the lumbosacral spine” and “traumatic herniated discs” were detected.

Due to the “fracture of the L-3 and L-5 vertebrae” presented by the student, Dr. Balsaín mentioned that in the coming weeks the Neurosurgery service of the Villa Clara Pediatric Hospital will re-evaluate the patient for possible surgical intervention.

Pino Burgos, the other injured student, had an exposed fracture of his left tibia. His extremity was immobilized with a plaster cast and “he remains admitted to the Pediatric Hospital in Sancti Spiritus, currently under care,” the doctor stressed.

Lázaro Emmanuel Cabrera Pérez, the third injured party, had a concussion, but his evolution was favorable and last Saturday he was discharged.

#The provincial director of Education in Sancti Spíritus, Andrei Armas Bravo, mentioned that the injured are tenth grade students of the Honorato del Castillo Urban Pre-University. According to his account, “a group leaned against a mural by plastic artist Alexander Hernández Chang, which is embedded in the wall and made of concrete, bricks and other heavy materials, and it collapsed.”

The director’s statement was questioned by an on-line commenter identified as Annia, who said that surely the wall was “glued with saliva because they stole the cement” and lamented the impunity towards the authorities: “Nothing is wrong with those responsible. It’s incredible.”

At the end of September of last year, the engineer Miguel Díaz Sistachs died in an accident when he was trying to place a flagpole in the José Martí Civic Square in Marianao (Havana) for the celebrations for the 61st anniversary of the Committees for the Defense of the Revolution (CDR).

That same month, the Guantánamo Provincial Directorate of Education confirmed the death of the girl Magalis Vázquez Gómez, a second grade student at the Amador Martínez Wilson elementary school, in the municipality of El Salvador. The Education directors argued that the minor was “hit by a signboard” during “recess hours.”

In January 2020, the girls María Karla Fuentes, Lisnavy Valdés Rodríguez and Rocío García Nápoles, about 11 years old, who were studying in primary school at the Quintín Banderas center, died after a balcony collapsed in Old Havana, between Vives and Revillagigedo streets, from the Jesus Maria neighborhood.

Neighbors of the place commented that the back of the building had begun to be demolished, but the area was not marked as would have been necessary to avoid situations like this.