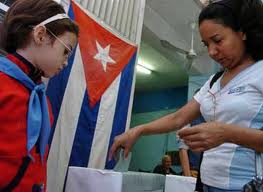 November 4, 2012. The second round of voting was held, where both aspirants tied to become delegates from that constituency. Part of the population didn’t vote because they consider it an unnecessary activity.

The neighbors of the constituency gave a “no” in not participating to choose in a delegate. María González who is 46 years old, said, “why vote for someone who does not represent me at all,” saying also that the delegates simply solve their own housing problems and are the first to steal from the State.

Raquel Garcia, 50, comments that the street in the area is a disaster and the person in charge of this is the delegate. “We’ve had the same delegate for years and nothing is resolved,” says Garcia. “But if you go to his house he has everything. Where does all that come from?” she adds, indignant.