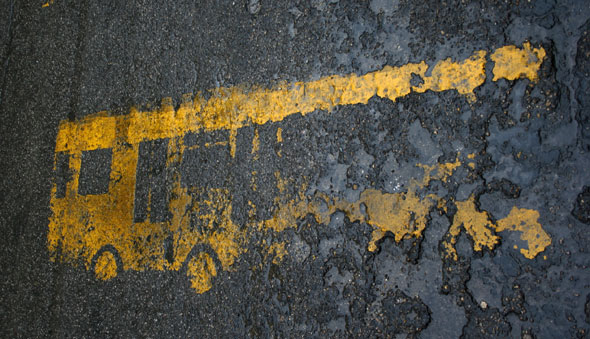 Seven years after the massive injection of new equipment for urban transport, the familiar scene repeats itself: seeing the buses pass without stopping at full stops where you can wait for more than an hour.

It was expected that the massive replacement of the fleet required, in turn, the spare parts and equipment to replace what was broken or worn out over time, as happens with battery and tires. That passenger transport hasn’t ceased to be overcrowded and in bad condition. The same thing happens with shock absorbers, suspensions.

The reality has been to rob Peter to pay Paul. Today the buses pile up in the bus terminals, out of service for lack of parts. Once again it has to reach a crisis point to take emergency measures.

The Minister of Transport, very serious, has provided the solution: Old Soviet-era trucks, experts in wasting fuel and polluting the air, will be equipped with a container for passengers. Semi-bus, semi-solution to semi-transport passengers. This is the summer we have ahead.

I found this little gem (I’m not saying if the Internet is considered a threat). The bold is mine.

Transport in the future tense

In December 2006, Transport Minister Jorge Luis Sierra, presented critically to Parliament the major causes in the deterioration of the available public transport. The blockade was number one, and then the deficiencies in the organization of the sector’s leadership; an inadequate technical assurance system for vehicle maintenance; lack of spare parts; labor indiscipline and incompetent officials; high labor turnover; decapitalization of buses; deterioration of infrastructure in the workshops; little financial assurance to meet the costs of replacement and maintenance, and inability to organize and plan accordingly.

There was surprise in the Cuban population when he mentioned as a recuperative measure the purchase of 200 articulated buses manufactured in China, 50 Mercedes Benz made purchased second hand, and another 344 for school buses.

With regards to investments he spoke over 150 million dollars used in the recovery of locomotives, more than 80 million for the repair of railways, more than one billion dedicated to the repair of over 300 bridges, highways and roads.

Many were skeptical and did not believe in the commitment of senior management of the country to solve the problems. But by March 2007 in the annual accounting, the Ministry reported the acquisition of over a thousand Yutong buses, 12 Chinese locomotives, the construction of two catamarans in Santiago de Cuba with capacity for 237 passengers; 123 tractor trailers, and 130 cargo cranes.

On that date they had already repaired 500 trucks, 96 locomotives, 2,847 rail cars, 12 tugboats, seven barges, six dry cargo bulk carriers and three grain carries; they had purchased 2,100 tonnes of long welded rail and restarted the production of sleepers in Villa Clara.

Still, at this time, what has been implemented is insufficient and there is not a sense of visible changes.

In October of 2007 the steps taken by the Ministry of Transport were explained to the people one more time. There it was mentioned that more than 1,500 buses went into operation, and others were purchased second hand, and circulating in the streets of the capital were 343 new Yutong buses, of which 285 were in Havana and 40 in Santiago de Cuba.

Some $ 3.2 million was spent to restore rail cars. They also acquired 200 new rail coaches for domestic trains and 19 locomotives, which would come into circulation in the second half of 2008 up to 2010, at a cost of $ 150 million.

They also said on the television show that in 2007 they received containers, 100 new locomotives, 100 silos, 100 general cargo containers, 1,900 trucks and 200 fuel tanks. Also planned and executed was the acquisition of over 100 locomotives, 3,000 freight cars, barges, coasters, trailers and trucks.

Given that in March 2008 the price of oil already exceeded $100 a barrel, recovery in the transport sector in Cuba can only be possible with a correct policy of saving and maximizing cargo capacities. Work is also needed in internal reorganization, the retaining personnel and improvements in efficiency through effective control, discipline and the attention of workers.

Today traveling the streets of the capital are new bus routes — including empty seats — comfortable, well ventilated, piped in radio or recorded music, a microphone for the drivers, and wait times of no more than 10 minutes at the stops, and although it all seems like science fiction, the fares have not been increased.

It is important to educate the public and the crews on every bus to take care of the equipment, and greater penalties, judicial and moral, should be applied to everything that threatens the survival of this equipment.

The full recovery of transport is not yet complete, but the winds are favorable, only socialism is capable of dealing with a problem, no matter how critical it is, and bringing together the unity of its forces to fix it. There was no need for privatization, or handing over the resources of the people to the monopolies. Instead, a state strategy, designed and well formulated, that can be the light for the advancement of society.

To conclude, a moral: Many hands make light work.

The journalist Nuria stumbled in her work: It was just a science fiction story.