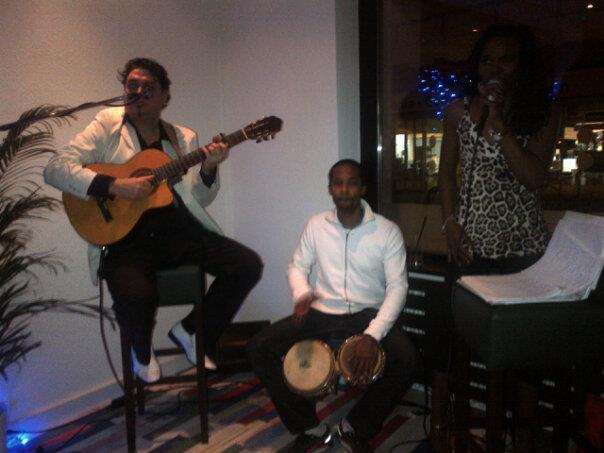 Last night, with a temperature below zero, but with the warmth of our enthusiasm, Tito and I undertook the route from France to Basel, Switzerland, in search of a new Cuban corner.

At Rümenlibachweg Street # 9 4052, in Basel, we found a cozy restaurant on the corner called El Cubanito, a bar-café. This cozy place was opened, after great effort on sacrifice, on December 29, 2012.

Its owner and hostess, a beautiful and friendly Cuban is proud, and rightly so the end result of her sacrifice.

When we arrived, and the place was already full, and musicians ready to begin: Dianelis, the singer, Jorge El Guajiro, on guitar and Coco on percussion, vibrated with Cuban music in the new place.

Already more Cubans were arriving as the night wore on, some young, some not so young, in a good wave that filled the room.

Dianelis, with her wonderful voice was giving us an overview of Cuban rhythms, offering a very special entertainment and her Besamé Mucho. They were soon joined by imitating the sound of the base in his throat, Alcides Toirac. They also incorporated the sounds of other Cubans present, playing keys and maraca.

We spent an amazing night and were among the last to leave when the place closed.

A feeling of nostalgia and longing for our homeland and family, and of joy, was the atmosphere that reigned in the particular room.