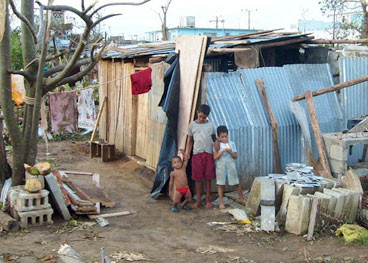 The journalist José Alejandro Rodríguez on his show on the Havana Channel yesterday referenced several complaints about the quality of newly built or repaired housing, which soon begin to show signs of deterioration. Last week on the show Cuba Says, on the TV news, there was an amazing report on the housing offered to people who remain in shelters, some of the for 40 (!!) years.

And what did I see? A rough and crude property, without plaster, exposed pipes. no slabs on the floor in the kitchen and bath. Some of the “beneficiaries” might even say they were happy, and it’s understandable for anyone who has to live with strangers: no privacy, no space, no sanitation, and no respect for others.

When it’s about supplies, Daddy-State didn’t exert too much effort to resolve the problem of housing, which has become critical, especially in the capital, where the number of people living in shelters, in the last year, reached  number similar to the population of Matanzas.

And not only has the State not resolved the problem of housing, but it weaned its babies transferring the problem to them. Those affected should now solicit loans, become hounds on the trail of construction materials, learn the trade, establish working relationships with people with similar interests, as it should always be, I think; only that those who today live badly should do it for themselves.

They were educated in the idea that good labor, political and social behavior would result in their being awarded housing through having earned credits at their workplace.

The dozen slums inherited from the government before 1959 were quickly eradicated. The same government that took them over is entirely responsible since then for the current number of 160 neighborhoods and settlements lacking facilities. Creating these favelas has nothing to do with the blockade or the imperialist threat; it’s one more demonstration of the inefficiency in administration and production from the same group that insists on convincing us that they can do it now.