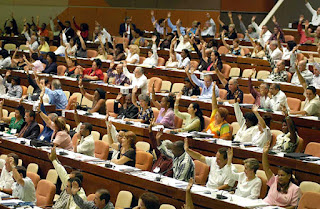 It’s sad to see the “deputies” applauding every stupidity that originates in the puppet theater, and how many respectable, and some admired figures — very few are left — are unaware that history will remember them as accomplices to the Totalitarian Government.

Not to be forgotten is the consistent attitude maintained by the painter Pedro Pablo Oliva, who was expelled because of his personal opinions from the “Assembly,” where the people had put him, where one is supposed to repeat the institutional unlikely tongue twister they present as “democratic socialism.” In reprisal they seized and closed his Home Workshop, a response of the dictatorship so that those “parliamentarians” won’t forget that here there is no democracy, only absolute obedience to the whims of the Castro brothers.

The truth is that at the last meeting of the “delegated representatives of the people”, the artist Kcho, (or perhaps his intentions were to venture into the humor and therefore I didn’t understood what he said), asked something stupid that I won’t venture to repeat again, and until that time he had been acceptable, because everyone’s opinion has worth, that is the teaching that they themselves have not learned.

The sad, dramatic, the unacceptable, is what the other “lawmakers” will give a standing ovation to, rising to their feet, as a way of shouting to the world “we are stupid and all of us are incapable of having individual opinions,” because you can’t conceive that there are so many cowards together, that no one has the courage to confront the slanders they perpetrate there behind the backs and against the people, forgetting that their names will be part of the disrepute and history will not forgive them.

The meetings of the “National Assembly of Cuba”, have become a place of sleep and overall apathy. We can see this simply observing what happens when the television cameras pan over those stale faces, struggling not to make their lethargy obvious, faces awakened only by the applause of some “parliamentary pilots” whose job is to warn them when they should be clapping or raising their hands in the unanimous vote that so shames us, and which is the living proof of the lack of individual thought in those instances.

Apparently we will have to continue to live with such “councilors”, only Fidel, Raul Castro and God, know why and what they are there for, but what most Cubans do know is that they are never going to benefit the people they claim to represent.