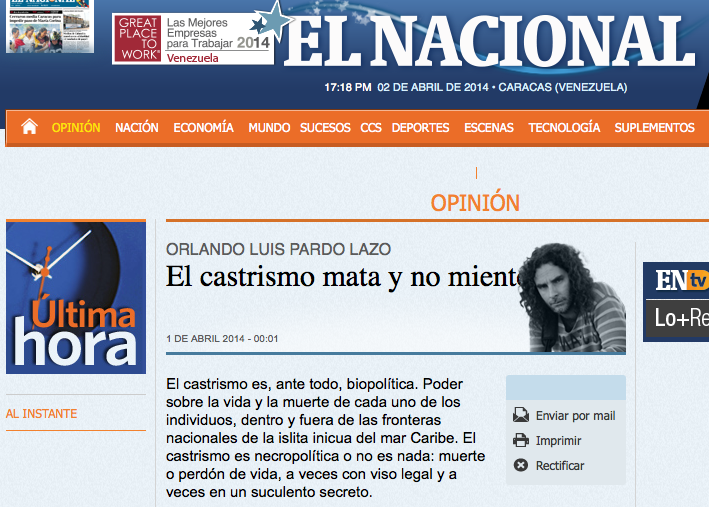 The Castro regime is, above all, biopolitical. Power over the life and death of each one of the individuals, within and beyond the national frontiers of the wicked little island in the Caribbean Sea. The Castro regime is nothing if not necropolitical: death or the pardoning of life, at times with a legal view at times in a succulent secrecy.

The death penalty was restored in Cuba as soon as Fidel Castro’s guerrilla’s were installed in the Sierra Maestra. Ernesto Ché Guevara and Raúl Castro, two “leaders” who did not cause a single member of Fulgencio Batista’s constitutional army to fall in combat, loved to kill handcuffed men, especially when the accused came from the ranks of their own Rebel Army. So they won their ranks, their epaulettes gleaming with the cadavers condemned by “conviction.”

In the so-called “flatlands,” in the violent urban underground of 1957 and 1958, the Revolutionary death penalty was happily applied right in the Cuban streets by the shooters—not to be confused with the terrorists—of the 26th of July Movement (M-26-7).

After the tremendous apotheosis of 1 January 1959, the government made death its first law, and shot en masse several generations of ex-Bastitaites and neo-Castroites. Thousands of “maximum penalties” are documented, but the real figure will continue to be a mystery until the end of time. There are no records. Not because an Orwellian intelligence apparatus destroyed them, no. There are no records because in the majority of cases no one kept them. They shot because people were pointed at. Even before trial. By decree. As an exemplary punishment. As prevention. Out of hatred for the Cuban people and their natural anti-communism. Over and over again, from “conviction”: that is, by the balls of the comandante.

In this list there are many crimes, with real bombs and improbable strokes, committed in exile. Some at the hands of Cuban diplomats themselves, who carry arms and shoot in peace, even in the most conservative capital of civilized Europe, as did Carlos Medina Pérez in London 1988.

this Castro List of the Fallen, in October 2011, in the Calixto Garcia Hospital in Havana, is the leader of the peaceful pro-democracy movement The Ladies in White, the beloved Laura Pollán, betrayed perhaps by those closest to her. Also on the Castro List of the Fallen, in July 2012, on a highway closed to traffic in the provinces of Camagüey or Las Tunas or Granma—we will never know, because no one has the right to believe in a State forensic report—are the founding leader of the peaceful Christian Liberation Movement, the intellectual Oswaldo Payá, along with his young collaborator Harold Cepero. Both Oswaldo and Laura had won for Cuba the Andrei Sakharov Prize for Freedom of Thought from the European Parliament, in 2005 and 2008 respectively.

We now have a living testimony of that double attack in eastern Cuba on Sunday 22 July 2012. This testimony was just released by the Madrid publisher Anaya.

The book is called Death Under Suspicion (2014), and it is the chronicle of the crime in the voice of the young Spanish politician Ángel Carromero (of the New Generations of the People’s Party), direct witness to the tragedy, who was driving the rental Hyundai when the extrajudicial execution struck, causing the fatalities of Harold Cepero and Oswaldo Payá. Also with them was the Swedish politician Jens Aron Modig, another survivor, but he has still refused to tell everything, after declaring “amnesia” caused by the “accident” provoked, according to the Cuban State, by the “imprudence” of a driver “without a license.”

The facts. Shortly after noon on 22 July 2012, the Hyundai was driven off the road by another car, perhaps in a classic PIT maneuver (bumping the car from behind). No one was injured. Then a group of men in civilian clothes swarmed the car. The foreigners were taken down with technical hits and then taken in separate vans to the hospital in Bayamo, by then already taken over by officials from the army and the national police. Little is known about the Cubans. But a few hours later, without medical attention, Harold Cepero and Oswaldo Payá were the latest corpses of the Castro regime.

Nothing was heard, nor will it ever be known, about the identities of those “anonymous heroes” who transported the two surviving foreigners. Nor were they inquired about at the trial held in Bayamo—perhaps because of an agreement between Havana’s Plaza of the Revolution and Madrid’s Moncloa Palace—where, months later, Ángel Carromero was condemned to four years in prison for “negligent homicide.” The Swede had already returned to Sweden by then, renouncing his political career, while his testimony was dismissed as “irrelevant” by a Cuban court in this “common case.” So he was never called to testify.

All this was known from the beginning, because Carromero and Modig sent several text messages just after the crime, and even managed to call their respective bosses in Sweden and Spain—now suspiciously silent—before their foreign phones were taken from them in the hospital and they were kept incommunicado, despite the demands of Payá’s and Cepero’s families to meet with both of them.

The most sinister part of Death Under Suspicion is that it is the testimony of a man condemned to death, because Ángel Carromero reports that, before finally being deported to his homeland to serve the rest of his sentence in Spain (in December 2012), a Cuban State Security official warned him that if he ever told the truth, he would also be extrajudicially executed, like Harold Cepero and Oswaldo Payá.

You can believe Ángel Carromero now or not. It doesn’t matter. But there are thousands of dead for us to believe this horror of the Cuban official.

The Castro regime only lies in public. In private, never.