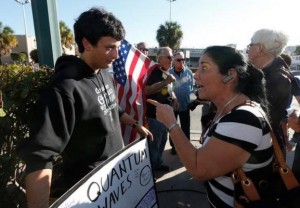 Cubant, Luis Cina Alvarez, Havana, 25 December 2015 — A year since 17D*, Cuban Miami grows ever more polarized. And it’s not only between those who favor dialogue with the Cuban regime and those who are staunchly opposed to the Castro regime –although at the end of the road, everything has to do, in one way or another, with that dichotomy.

There are those who love Obama (the few) and those who detest him, who deny his part in lifting the US out of the recession, who categorically assert that Obamacare is crap, who accuse the president of being pro-Muslim and a leftist, of being too soft in foreign policy (especially regarding the Castro regime), of endangering the country’s security in the face of jihadism, of exacerbating racial tensions, etc.

There are those who declare that they will vote for the Democrats — that is, for Hillary Clinton, but never for Bernie Sanders — and who say they are Republicans for life, who fervently prefer Marco Rubio (a sign posted in Coral Gables proclaims that Florida is his) –or Ted Cruz — but if neither of these wins the Republican nomination, they are willing to vote for Donald Trump, all his outrageousness and clownish behavior notwithstanding.

There are the early arrivals, not only the ones who got there in the ’60s, but also via the Mariel Boatlift in 1980, and those who arrived after the Rafter Crisis of 1994; those in Hialeah and the Southwest, and those in Coral Gables, Kendall or Coconut Grove; those who buy groceries at Publix or Sedano’s; those who speak English and those who don’t make even a minimal effort to garble it; those who favor lifting of the embargo and those who advocate for its continuance; those who defend or oppose the Cuban Adjustment Act; those who support and sympathize with the dissidents and those who don’t trust them and want nothing to do with them; those who oppose sending of remittances to Cuba and those who are not willing to let their families live in misery; those who protest the appearances by Cuban artists in Miami, even Los Van Van, and those who groove to reggaeton and guachineo as though they were still back home in Mantilla or San Miguel del Padrón.

During my stay in Miami, I listened to many discussions for and against the US government rescuing the thousands of Cubans stuck at the border between Costa Rica and Nicaragua. Many are sensitized to the hardships that their compatriots are facing, while others say that among those who seek to reach American soil, besides there surely being G-2 infiltrators, the majority are lumpen, lowlifes, people who never lifted a finger against the regime and, meek as they were, turned into lions when it came time to claim their rights — both those that were due and not due to them — the moment they set foot on foreign ground.

In Miami some Cubans take pride in being exiles, while others say — as the Castro regime likes for them to say — that they are economic and not political migrants, as from any other country in the region. Very few of them will be honest enough to admit that they “don’t want to get mixed-up in politics” so that the activation of their passport won’t be denied and they’ll be able to travel to Cuba to visit their relatives. For there are those who can go for a year without seeing their loved ones, and those who say that “as long as that system remains unchanged, they will not even be roped-in to returning.”

What all of these Cubans have in common, whether they acknowledge it or not, is that they are pining away for their country and all that is familiar to them–the good, the not so great, and even the bad. And it is precisely this nostalgia that unites them while at the same time divides them. And what can be done about this, so passionate are we Cubans.

*Translator’s note: Just as Americans say “9-11” instead of September 11, 2001, Cubans say “17D” instead of 17 December 2014, the day Barack Obama and Raul Castro jointly announced the restoration of relations between the United States and Cuba.