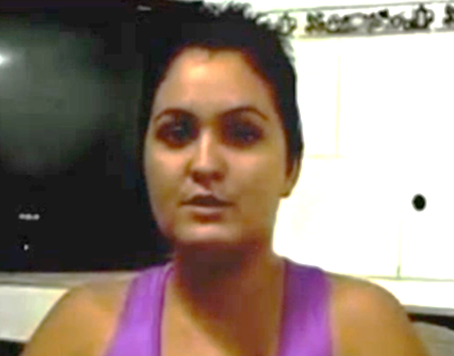 My name is Maireni Saborio Gonzales, I am 23 years old and I live in city of Caibarien, Villa Clara.  I left as a boat person or rafter on September 25, 2012 and I was jailed for 11 months in the Carmicheal Center located in Nassau Bahamas, where later on I was deported back to Cuba on August 21, 2013.

While in Bahamas, I psychologically suffered very much.  I was the woman who was raped by the immigration officer in Bahamas.

I am very afraid to be in this country – Cuba – because I declared myself as dissident on some United States’ radio stations, on the internet and I repudiated wanting to return to Cuba in all instances.

I am under a lot of tension due to all the things that have happened to me; I also had to denounce the Bahamian authorities because of their lack of protection during the time I was imprisoned, due to the sexual assaults that I suffered on several occasions and I am under pressure too because I was returned to a country where I haven’t been able to find a job and I feel that I am under surveillance at all times.

I was one of the women who stitched their mouths shut; I surrendered my beauty and I shaved my head to collaborate with my compatriots, 24 Cubans completely bald.  I did two hunger strikes, one that lasted 18 days and the second one that lasted 16 days, and there were men on strike too.

The Bahamian government detained me because I tried to kill myself due to the psychological stress that I was under.  They detained me and took me to a mental institution in which around March I took a mixture of 20 different medications so I could take my life.  Afterwards, they took me to the Silent Hospital, another medical institution which the Bahamanians have on the island of Nassau to treat the mentally ill.

As I said before, there they gave me medications and wouldn’t tell me anything about what was going to happen with our situation and I was extremely stressed.

We witnessed beatings, we saw our compatriots be beaten, the video that is going around the world is not a lie, this video is real and we lived it and we, the women, decided to go through everything that happened because nothing that you see in those photos and on the internet is a lie and we decided to do it because we were tired of these things and of existing under those horrific conditions in which we found ourselves where we didn’t even have drinking water and we had to sleep on the floor and we couldn’t communicate with our families and we were continually sexually harassed.

In addition to seeing how they mistreated our compatriots, we had no human rights, no one we could count on and we lived in this place in this concentration camp that was horrible and what we wanted was for the whole world to see what was happening and what happens with all these Cubans. We were a little more than forty Cubans who were in the detention center, we aren’t criminals and the only thing we were looking for was a window to freedom and I ask, please, that everyone who sees this video knows what is is real and help us so that one day we can see the freedom we so greatly desire.

Translated by – LYD and RST