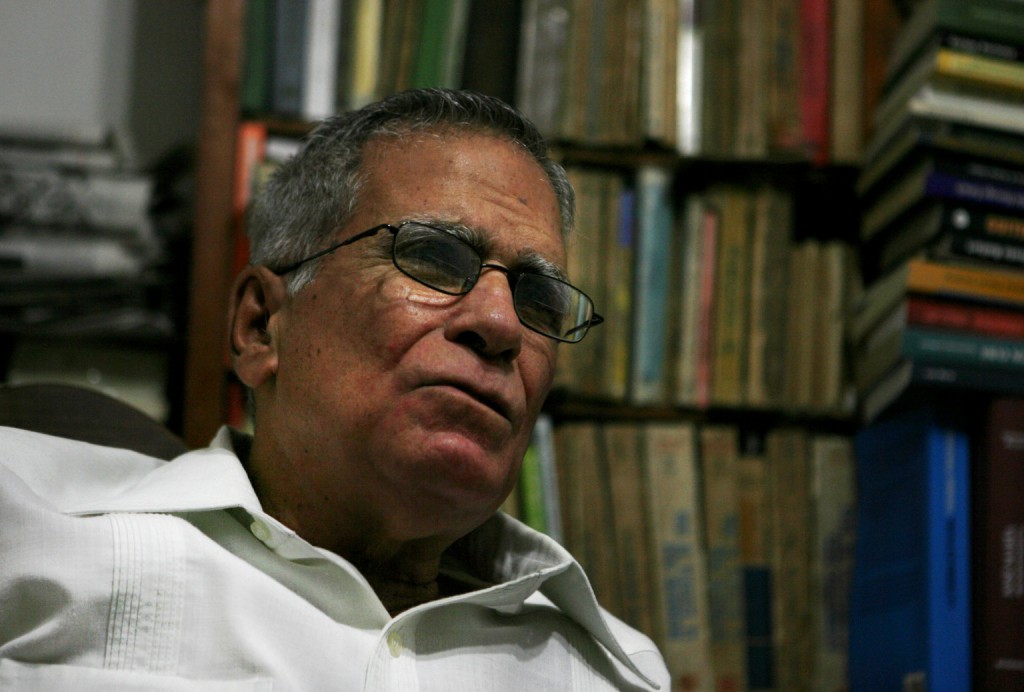 HAVANA, Cuba , September, www.cubanet.org – I chose to let a few days pass before writing a few lines about the unfortunate death of the eminent Cuban economist Oscar Espinosa Chepe, in Madrid last Monday. I knew that many colleagues would write about it but was not intimidated by the idea that my possible arguments would be used before, by these alternative journalists.

Indeed, there were a great number of pieces published about the member of the Group of 75, a prisoner of conscience on parole when he died, still subject to fifteen years in prison. Cubanet, the prestigious digital daily to which he was a regular contributor, published on Tuesday alone six works devoted to the distinguished professional. A deserved tribute.

I met Oscar in the seventies when we both worked together in the architectural complex occupied in part by a body with a long name: The National Commission for Economic and Scientific-Technical Collaboration. It was an old building of luxury apartments, located at the corner of First and B, in El Vedado.

Both of us, having rare second surnames, were known primarily for this. Chepe was concerned with coordinating, for Cuba, the links with several of then socialist countries of Europe, while I served as General Counsel for the participation of our country in the giant factory of meetings and papers known as CAME: the Council for Mutual Economic Assistance.

They were, strictly speaking, two different state agencies, although we were in the same building because the leadership of both entities was occupied by the same director. We dealt with different topics, so that the business contacts between Chepe and me were almost nonexistent. However, as the group was small, we met and interacted, but without much depth.

In time, the decision to live in the truth, that we each made separately, brought us together again in the ranks of internal dissent. In Chepe’s case, the formidable work of economic analysis he performed was punished with imprisonment during the dark Black Spring of 2003.

The inconsistency with which the Castro regime acted in his case is illustrative: Against the defendants at that time they brandished the pretext that they served the United States and supported the embargo maintained by that country against Cuba. It was of no use to Chepe that for years, and until the day of his death, he was a firm opponent of these measures. Castro’s judges punished him regardless.

Those of us who had the honor of knowing him, will always remember his kindness and his substantial conversation, peppered with funny anecdotes of the times in which he grew up believing in the justness of Communist ideas. In these stories, the amazing nature of this absurd system was reflected with precision no less than that of his well-argued articles devoted to the problems of his specialty.

During my recent trip to the U.S., I had the opportunity to observe the immense prestige Chepe enjoyed among his colleagues. At the congress of the Association for the Study of the Cuban Economy, scholars devoted to these issues — and also highly competent professionals — expressed with one voice their disappointment at the absence of the illustrious gentleman from Cienfuegos, motivated by his illness.

It wasn’t the first time that he had been unable to attend such events in person: the refusal to allow temporary travel of dissidents abroad, kept for decades by the Cuban government and lifted just months ago, prevented him from attending. However, he always collaborated with substantial presentations that were followed with great interest by his colleagues living outside the island.

In death Chepe joins other pro-democracy activists who have suffered in the internal opposition over the years. His name is now joined in our memory with those who preceded him in this passage: Jesús Yanes Pelletier, the Moncada attacker Gustavo Arcos Bergnes, Orlando Zapata Tamayo, Juan Wilfredo Soto, Wilman Villar, Laura Pollán, my father-in-law Bienvenido Perdigón, Oswaldo Payá, Harold Cepero…

Many have fallen during these decades of peaceful struggle. Not remotely as many as those killed in combat or shot during the early Castro years, but they are closer to us. They make the oldest of us feel like castaways who have managed to survive while they have gone before.

But they also show us the way forward. Their memory and their work inspires us and their work remains as a guide to those who follow in their footsteps in this peaceful battle. In that sense, Oscar Espinosa Chepe was and remains an outstanding example.