14ymedio, Mario Penton, Miami, 14 February 2017 — Hundreds of Cubans were stranded in Mexico after the Obama administration ended the wet-foot/dry-foot policy that favored Cuban’s immigration to the United States, but for the 90 who are detained at the 21st Century Migrant Station in Tapachula, and for their relatives in the United States, the American dream has become a nightmare of extortion and disappearances. A hope against all hope.

“For weeks a person has been calling us to ask for money if we want to see our families again,” says the mother of one of those stranded who asked not to be identified to protect her son.

The woman, who lives in Miami, recounts how within half an hour of receiving a call from her son from the Migration Station the phone started to ring from different numbers in Mexico.

The voice on the other side of the device identified himself as “lawyer Padilla.” She said, “He tried to learn the names of our family members and told us he could help get them out of there for a sum of money.”

To Yuniel, stranded in southern Mexico, those responsible for these calls are the agents themselves from Mexico’s National Institute of Migration (INM).

“We all know that the migration officials have some way of knowing the numbers of the people we call in the United States. Somehow, they figure out the numbers and then take advantage of that to extort the families,” he says

The telephones set up for international calls at the Migration Station are public, but at least three relatives of different migrants consulted by this newspaper affirmed that they had received calls in which people calling themselves officials asked them for money for the freedom of the Cubans.

“We are afraid for their fate, they are in the hands of mafiosos. Last week three Cubans ‘disappeared’ from the same prison. As of today, we haven’t heard anything from them,” says the mother of a Cuban migrant.

An IMF official confirmed to 14ymedio that there are currently 90 Cubans at the 2st Century Migration Station. Of these, 59 asked for protection before a judge and 23 asked for refuge from the Mexican authorities. The remaining eight are awaiting the decision of the Cuban embassy in that country. If Havana recognizes their citizenship, under migratory agreements between the two countries they must be deported back to Cuba.

With regards to the absence, since last Wednesday, of three Cubans (Armando Daniel Tejeda, Daniel Benet Báez and Yosvany Leyva Velázquez) the official said that it was an escape, which is why they are not considered missing. So far the relatives of the Cubans do not know the whereabouts of these migrants.

With regards to the accusations against the INM officials, the representative of the Mexican government made it clear that “they are lies.” According to her, the immigration agents do not even have guns or clubs.

“They (the Cubans) are very desperate. We aren’t trying to justify ourselves, but we believe that is the cause. ”

“Two of them had sought refuge and one was waiting for the legal process. Both of them escaped and the corresponding authorities were given notice.”

It was the migrants themselves in the 21st Century center who discovered that three Cubans were missing and, given the silence of the authorities, they began a protest that was brutally repressed, according to those stranded. The police and the Mexican army participated in putting down the revolt.

“They were beaten, their blankets and mattresses were taken away, forcing them to sleep in cement bunks. They are being watched and held as if they were criminals,” the migrant’s mother told the newspaper.

“My son may disappear, just as those have disappeared,” she adds. 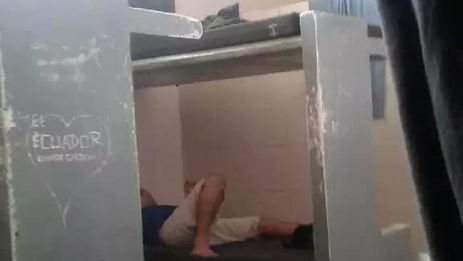 Last week a group of eleven Cubans was kidnapped by a criminal gang and later released under conditions not made clear in Reynosa, northern Mexico.

Corruption prevails in Tapachula, according to the testimony of Yuniel, one of the stranded, who has been waiting for more than a month for a safe conduct to continue to the north of Mexico.

“Receiving money from abroad is impossible without mediations,” explains the migrant. If you do not have the corresponding visa, the transfers made by Western Union carry a charge from locals who are awarded a commission of 5% for the transaction.

The hope that Trump will reinstate the wet-foot/dry-foot policy or declare an amnesty for stranded Cubans is increasingly remote, according to Yuniel, even though that the number of Cubans arriving in Mexico from Central America “has taken a nosedive.”

“All that’s left for me is to surrender to the authorities and ask for political asylum. I have nothing to lose because I have lost everything,” he says.

Some relatives in the United States who have contracted legal services in Tapachula to avoid the repatriation of the stranded complain of the slowness of the processes and even of scams.

“The attorney José Roberto Escobar Ross allegedly filed an protection petition for our relatives not to be repatriated to Cuba, and demanded the payment of $120. To this day, they are still being detained,” says the girlfriend in Miami of one of those held in Tapachula, Karla Ramírez.

Escobar, via telephone, explained that he has in his hands the 59 protection orders for Cubans and that he is doing his best to get them released as soon as possible.

“The judge gave Migration three days to solve the case of the Cubans but until now we see no response, they haven’t even been released,” he said.

The INM official made clear that there will be no releases until the legal proceeding has been held and a judge determines the fate of the Cubans.

“It is not the fault of the INM that they are detained. By law, these people cannot be released until the trial is held.” It costs Mexico to for these people to be there, to feed them, to care for them and so on.”

In the case of Cubans who asked for refuge, the National Commission for Refugee Assistance is responsible for analyzing their cases.

For Ramírez, the girlfriend of one of the detainees, this is a maneuver: “They are trying to delay their release as much as possible so that they have no choice but to return to Cuba or they run out of money. It’s a hell for us Cubans.”