State violence has been the Cuban regime’s principle recourse for maintaining power for over 55 years. Beginning with the insurrection against Fulgencio Batista, executions, as a method of punishment, were used relentlessly. Anyone who wanted to show their loyalty had to deliver the coup de grace and take part in executions. A mix of the Communist brutality of Mao’s China and Stalin’s Soviet Union, with doses of the Mexican Revolution.

Watching the revolutionary courts, the shouts of “to the wall,” the ruthless political imprisonment, and the continued executions ratified and defended by Ernesto Guevara on the dais of the United Nations itself, instilled a feeling of helplessness within a great part of Cuban society.

The so-called Cuban Revolution has a violent history that it will never break free of because it is part of its nature. The infamous “acts of repudiation” in the ‘80s led to the more frequent use of vigilante groups, known as “rapid response brigades,” who doled out beatings and followed orders with the objective of instilling terror in citizens.

These rapid response brigades have been transformed in content and action according to the circumstances and needs of the regime. In the ‘80s they focused on those Cubans who wanted to leave the country; starting in the ‘90s they used them against human rights defenders; until finally coming to focus on any opponent or activist.

Today, these groups for the most part are made up by paid agents of the Interior Ministry, working surgically to prevent the spread of outbreaks of discontent or free thought within the Cuban population. 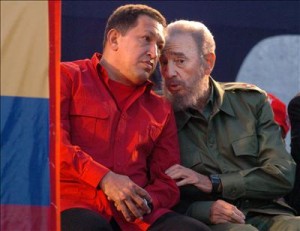 With the coming to power of Hugo Chavez, Fidel Castro’s influence in Venezuela became visible. After the failed coup d’etat against Chavez in April 2002, the Havana regime increased its influence in issues of security and its military presence became increasingly notable. Of course the “rapid response brigades” were also exported from Cuba, now called “Bolivarian militias” or “collectives.” Since then, they have concentrated on arming and preparing them to respond with violence and terror in the face of possible democratic demands.

The reaction of these violent vigilante to the protests of recent days has made clear that the “collectives,” in coordination with the police forces, have orders to stifle any protest through the excessive use of violence. Terror must be part of the Venezuelan imagination for the full functioning of the regime-under-construction.

The Chavista strategy has been to wrest away democratic spaces, fragment them, and even to dismantle not only democratic institutions, but also civil society organizations. Cuba’s ruling elite knows that a change in Venezuela implies enormous pressure on the island and the certain end of the Castro regime. They know that ordering or driving indiscriminate repression in Venezuela has no legal consequences for them, but rather for the regime in Caracas. They would prefer a thousand times over to cling to the oil no matter it costs, rather than coming to a massive repressive crackdown on the island.

The Venezuelan military should know that Havana will lead them to the brink without the slightest hesitation, but at the same time they should understand that the Castro regime’s codes are not those of the present century — in this century they can often be counterproductive and extremely dangerous.

What is happening in Venezuela should raise serious concerns on the continent because it opens the door to a social dynamic with unpredictable consequences. To create and institutionalize urban vigilante groups, which, to sustain power enjoy perks and impunity, creates an extremely complex scenario in a region where the Rule of Law remains a dream yet to be achieved.

In a region where organized crime, marginalization and poverty are part of the reality, the spread of Cuban methods of social control should set off alarm bells. The violence and cynicism of the Castro regime can still do a lot of damage in Latin America. The Cuban pattern is disastrous. To spread it would undermine the still weak Latin American democracies.

It is essential, therefore, to offer major support and solidarity to the efforts of Venezuelans. Not only is the return of democracy and fundamental rights being decided there, but also being decided is putting the breaks on the introduction of state violence through the use of criminal gangs and urban vigilantes as a norm in the region. Those of us who defend democracy, have a commitment today to Venezuela.