There was an issue Yoani Sanchez did not address in the Brazilian Congress: the conspiracy of the Cuban ambassador against her.

When the blogger set foot on Brazilian soil we recommended that she not refer to the intrusion of the Cuban ambassador, because we still didn’t have sufficient evidence to make a fair judgment, nor did we know what was the real participation of the officials of the office of the President of the Republic in the events of the conspiracy. 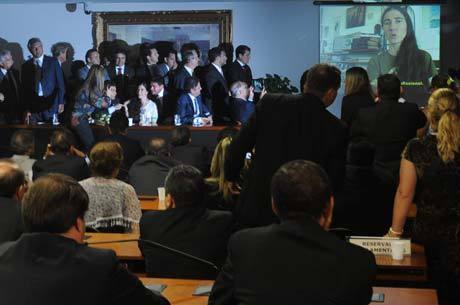 As a foreign visitor, Yoani maintained a prudent silence about it, despite being a victim of envoys from the Cuban ambassador. However, the Brazilian documentary filmmaker, Dado Galvão, whose presentation was sabotaged by the embassy employees, had the complete right to protest before the Congress of his country about such interference.

In effect, when we visited the Brazilian Parliament and before giving the floor to the Cuban blogger, the deputy who presides over the sessions, Otavio Leite, not only gave the floor to Galvão, but to make up for the forced suspension of his documentary in “Feria de Santana,” right there in the National Congress the part of the documentary was shown where Yoani denounces and criticizes the repression against the Ladies in White, who appeared led by the well-remembered Cuban martyr Laura Pollan, whose figure appeared on the screen of the Brazilian Congress. Dado Galvão, on speaking before the Parliament, demanded from the Congress — and the judicial authorities — “a thorough investigation of the participation of ‘a foreign ambassador’ organizing extremist groups to sabotage the exhibition — on Brazilian soil — of a documentary made by a Brazilian. This is inadmissible,” said Galvão, demanding justice.

We left Brasilia for Sao Paulo for the second stage of Yoani’s visit. There were no mishaps with demonstrators in the Brasilia airport because Deputy Leite had accompanied us the entire time up to the door of the plane, but not before inviting Yoani to visit Rio de Janiero the following Sunday, to enjoy a program of visits to tourist sites. An hour and a half later we were in Sao Paulo, the largest city in South America and among the five largest cities in the world. Waiting for us at the door of the plane was the president of “Contexto” Publishers, Mr. Jaime Pinsky, who had translated and launched in Portuguese Yoani’s book “From Cuba with Affection,” two years earlier. The book is a collection of Yoani’s blog posts. Pinsky was in charge of the blogger’s program in Sao Paulo, which included visits to large newspapers, television stations, debates with Brazilian bloggers and the relaunch of her book, with an autograph night included. Pinski invited Yoani to stay in his private home, and Dado Galvão and I were transferred to one of the city’s major hotels, where, by coincidence, the 35th anniversary of the founding of the Labor Party (PT) was underway with Lula da Silva and Dilma Rousseff. Upon arrival, we ran into the party leadership in the common areas of the hotel. The following day, Thursday the 21st, Galvão and I went early to the headquarters of the daily “O Estado de Sao Paulo,” the largest circulation newspaper in the city, which publishes the posts of Yoani in Portuguese and which had prepared a voluminous program for her at its headquarters. Yoani started early with a half-hour radio program with the “Estadão” group, which is the popular name for the newspaper.

From there, the blogger was taken to an auditorium full of journalists, personalities of the culture, and Sao Paulo intellectuals, invited to meet her personally and ask her questions. The auditorium was full and when Yoani appeared on stage she was greeted with loud applause. Her appearance lasted just over an hour, answering questions of every kind, after which Yoani recorded a TV program, with questions and discussions about opinions of the Cuban reality and the blogosphere. This program is on-line at “Estadão’s” site. After the TV show we were invited to lunch with the executives of the newspaper and some prominent Brazilian journalists especially invited to meet Yoani. 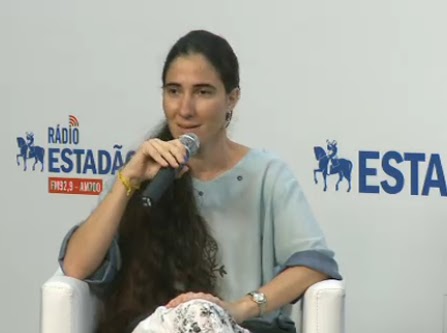 We finished lunch and after a long post-lunch chat, with Yoani answering other questions, Jaime Pinsky and the blogger left for the studios of TV Cultura, where Yoani was a guest on the most important interview program on this Brazilian TV station, with the largest audience, “Roda Viva” (Live Wheel), on a magnificent set. This program has interviewed major world figures who visit Brazil, including Fidel Castro. TV Cultura in Brazil is a public television station, administered by each state of the federation, which has a very diverse cultural programming, following regional interests. The program recorded by Yoani was acquired by TV Cultura de São Paulo and was broadcast on Monday the 25th for the whole country.

During the nearly three-hour interview (conducted with simultaneous translation), Galvão and I were able to get away to record another TV program, taking advantage of Yoani’s fame. In “Roda Viva” there were about eight journalists in a circle around the blogger. In the interview they asked virtually the same questions that Yoani had already answered many times over the extended 40-plus hours of recording in the South American giant, but she  went far beyond the detail previously mentioned in this article, because it is important to say that our emblematic blogger dismantled, in Brazil, the Castro regime’s scaffolding brick by brick with painstaking patience, simplicity and credibility. It was a lesson in patriotism.

On Thursday night, the 21st, there was a meeting scheduled with Yoani and São Paulo bloggers, for an exchange of opinions, techniques and how-to’s. When the discussion had barely gotten underway, the Cuban embassy’s protestors appeared, trying to sabotage the meeting. Another group of Brazilians, “friends of Yoani,” also appeared in the auditorium where the discussion was being held and there was an unpleasant encounter between the two groups in the auditorium itself, resulting in the meeting being suspended, to the detriment of those interested in this specialized exchange. The instructions of the Cuban ambassador to São Paulo were apparently, “Don’t let her talk.” 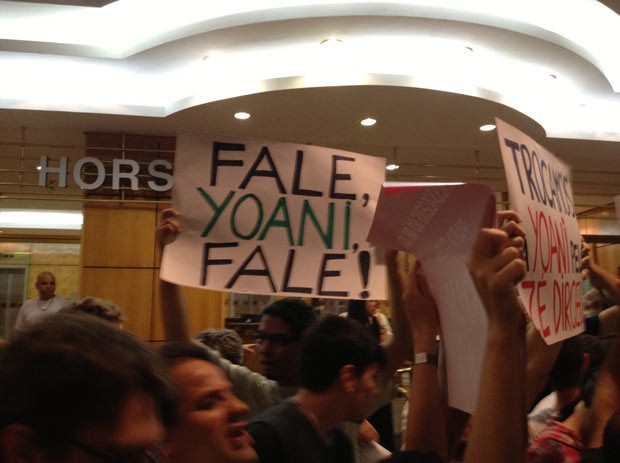 On Friday, the 22nd, Yoani taped a program for the Bandeirante television network, one of the major private TV networks in the country, which was aired in its prime time interview program on the 24th, and broadcast during the week on other stations in the network. That day, the governor of São Paulo, Geraldo Alkimin, one of the ‘heavyweights’ of Brazilian politics, invited Yoani for lunch, followed by a visit to the Memorial that tells the history of that state. In parallel with these activities, the largest private TV network in Brazil, TV Globo, assigned a permanent cameraman to follow Yoani, to prepare a long story for one of the most-watched Sunday programs in Brazil, “Fantastico”, which aired the interview with Yoani on Sunday the 24th in prime time, where Yoani Sanchez was seen up close and personal, packing, eating breakfast, joking with her companions, among other scenes rarely seen in public.

On Friday night, the 22nd, an “autograph night” was scheduled, with book signing by Yoani, which had to be suspended because of the embassy’s protestors, who again encountered a pro-Yoani group, which even led to a scuffle, but without major consequences.

On Saturday the 23rd the re-launch of her book, “De Cuba con Cariño” was scheduled at the Saraiva bookstore in one of the largest shopping centers in the city, in the Higienópolis neighborhood, which was suspended by the shopping center management which would not authorize the activity, based on a fear of new confrontations in an inside space, full of glass and fragile objects. The Cuban embassy continued in its determination to sabotage the Cuban blogger, despite the unanimous repudiation of its actions. This effort against a frail woman with easy words and a sweet smile, were the culmination of a landslide victory for the cause of democracy in Cuba. Brazil saw very clearly that the Cuban government does not respect its citizens and also interferes in any friendly country with such ignoble purposes as discrediting a person of such clear and organized thinking. 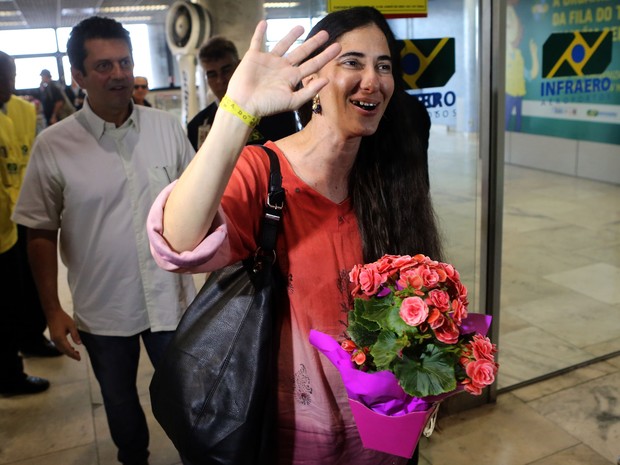 In view of the need to suspend Yoani’s activities in São Paulo, Pinsky coordinated with Deputy Leite to move up Yoani’s rest break to Rio de Janeiro for Saturday night, a time when the group of us who accompanied her stay in Brazil said goodbye to her, because I  would return to the city of Belém, Pará state of Brazil, where I live, and Galvão would return to to Jequié in the state of Bahia. Yoani spent a great Sunday in Rio de Janeiro, without her friends along, accompanied by Deputy Otavio Leite, who led visits to the most important places in the beautiful city of Rio. Her route was public and like rest of her public endeavors, there were the expected spontaneous signs of solidarity and appreciation, lacking in the organized “acts of repudiation.” On Monday the 25th Yoani Sánchez left from Rio de Janeiro, bound for Prague. 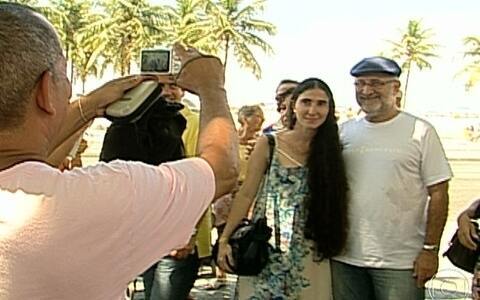 Leaving aside the purely partisan interests or those of organized groups of Cuban dissidents and considering that every Cuban has a point of view on the whole universe of issues associated with the struggle for democracy–with little chance of agreement–Yoani Sanchez’s trip to Brazil has been a complete success for the Cuban democratic opposition as a whole. For the first time a recognized opponent of the regime, in this case Yoani Sanchez, has been given an authoritative voice in the Parliament of the largest and most influential Latin American nation. She was given access to the country’s major media, including the highest rated programs on radio and TV in Brazil. We can say without a doubt that Yoani Sanchez’s visit to Brazil definitely has lifted the veil from the Cuban political reality for the Brazilian people. Brazil finally knows that Cuba is not the Communist Party, nor is the Cuban nation Fidel Castro; it knows that Cuba is a diverse people, intelligent and battling for their freedom.

I want to recount the main points touched on by Yoani Sánchez in the dozens of hours of recording time for Brazilian TV, all aired in prime time, in addition to the points made earlier in this article:

Articles by this author can be found at http://www.cubalibredigital.com