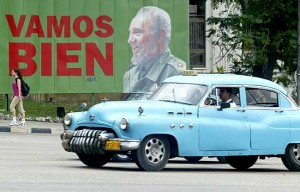 In theory, to live under communism should be a nice little number for Cubans. As money doesn’t exist, you don’t have to pay bills for rent, electricity, water or the phone. If we had internet connections, they would be free, too.

If you’re hungry, you go to the supermarket and fill a trolley with groceries. No check-outs or security cameras. If you get tired of your old American car, you pop down to the showroom and swap it for a Russian or Chinese model.

In practice, the idyllic communist society that we’ve had to listen to them banging on about for half a century is completely crazy. And unsustainable. An incredible dogma. A trap to catch out the gullible.

Religions involve individuals. But the worst thing about the theories of Karl Marx is that they involve the society as a whole and condemn it co-exist with dictators, tyrants and patriarchs who, with a firm hand, are meant to lead us to a system in which everything is free. Quite a tale!

The reality is very different. To achieve unanimity, laws are made which send those who disagree to prison. Parties with other shades of ideology are forbidden. And those who defend the Western lifestyle are contemptuously called ‘unpatriotic’.

In closed regimes, the clever people insist that socialism, the prelude to communism, is better than capitalism. So far no one has been able to prove this. Look at the case of Cuba. An island with an unstable economy that lives like a beggar, going cap-in-hand around the world.

The worst thing is that after 50 years of deprivation the local ideologues tell us that with the new policies of sackings, private enterprise and the removal of state subsidies, now, really, truly, we are going to start… the construction of socialism!

A bad joke. The US embargo of Cuba is no excuse for the fact that fruit and vegetables have disappeared in this country. That the fields are filled with the invasive marabou weed [Dichrostachys cinerea- a plague in Cuba]. That the cows give little milk and the hens have gone on strike.

The leaders in Cuba survive with the millions sent back home by emigrants and with the dollars and euros spent by the capitalist tourists. With this ‘enemy’ money they want to build their communist utopia.

They’re stubborn. Not even the example of the late USSR — which fell after 74 years of gross stupidity and brought the Berlin Wall down with it — makes them doubt Marxism.