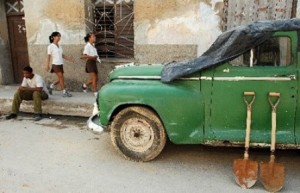 Nearly half a century after the devastating “Revolutionary Offensive” of March 1968 — in which the State took control of virtually all private businesses remaining in Cuba — the same government officials that ended the small and medium-sized private ownership, approved a list of 120 activities people can pursue on their own. Nice! The measure becomes a door in the wall of intolerance, but is insufficient because it does not release the means of production now in the hands of the State, which preserves almost absolute control to the detriment of millions of people and the national economy.

Lately many Cubans have sought out the list of approved occupations, to photocopy it, or take notes about it, and distribute it among friends and relatives who were laid off from the inflated company payrolls, or will be laid off in the coming months. The document is a stimulus for the million unemployed that the government has sent home, finishing off the little game of giving everyone a job, but it does not come with sources of raw materials, transportation to distribute production, nor salaries that give dignity to those who work.

In reviewing the list I noticed that of the 120 occupations people can pursue on their own, subject to getting a license and paying taxes, 22 are essentially rural activities and 98 are urban. Thirteen relate to transportation, six to construction, fifteen to culture, five to education, two top public health and a number of agricultural tasks, the priority sector for the freeing up of carriers and carters, animal sellers, palm tree toppers, blacksmiths, diggers, shearers, herbalists and scalping grudge keepers of the army of agricultural inspectors and the officials of the National Association of Small Farmers (ANAP), whose president speaks the new language of power.

The small hole in the wall of control does not preclude state surveillance, but opens a personal path in the totalitarian forest. So, for example, commerce will have messengers, tailors, hairdressers, watchmakers, florists, piñata sellers, barbers and others who will depend on themselves and contribute to the treasury, while employees of State bodegas, stores, cafes, restaurants, and garages will continue on the collective model, without competing with anyone, neither having to find the goods nor pay the taxes on local sales.

For their part, the construction sector will send its employees home to work for themselves as bricklayers, carpenters, painters, plumbers, electricians and decorators who, in a few months, will be licensed and paying taxes. Woodworking will be limited, however, because there is no wholesale supply of wood and the costs of tools and equipment is very high, all of it in the hands of government businesses.

Even culture has been freed up a bit with a list of approved activities for self employment. Among the trades authorized are musical instrument tuners, artisans who are both registered and not-registered with the Cuban Association of Craft Artists (ACAA), buyers-sellers of old records, bookbinders, engravers, photographers, art restorers, and language translators and interpreters. 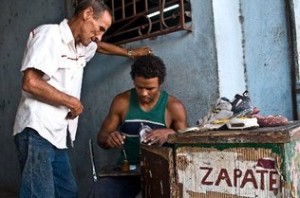 A wolf in sheep’s clothing because the government still owns all the movie theaters, cultural centers, art schools, art galleries, bookstores and theaters, and the network of centers and businesses that control music programming, dance groups, and of course radio, television and the printed press. Hardly anything? Right?
Dozens of legitimate jobs have been released to thousands of drivers for hire, parking attendants, bicycle taxi drivers, boat captains, drivers, shoeshiners, manicurists, makeup artists, typists, language and music teachers, school cleaners, and chiropodists — all of whom can now work at their own risk in accordance with demand for their services.

There are those who are quick to associate this great List with profound changes in the model of State domination over individuals. The self-employed activities unleash the hope of independence and self-improvement; but Watch Out! Those who imposed the chaos and appropriated everything in the name of egalitarian ideals are still holding the reins. If they open a door in the wall, it is to retain their power.