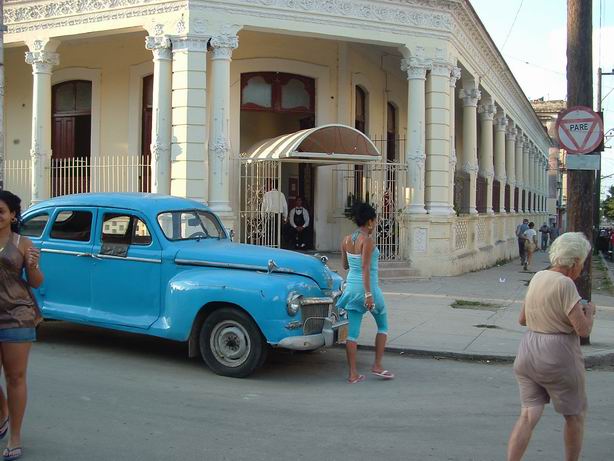 Every night she dreamed of Santiago de Compostela. It was a recurring dream for Antonia Ortega, who died in Havana at age 86, without returning to visit her native Galicia.

But Antonia described so vividly the places of the Galician capital to her daughter Rosario that she feels she has known the city inside out since childhood, though she has seen it only in pictures.

“My mother has given me a passion for Galicia and its customs. She inherited it from her usual habit of sitting at night in the backyard of the house to sing old Galician songs and dance muñeiras,” says Rosario, 69.

She lives in the bustling neighborhood of Santos Suarez in the Havana municipality of Diez de Octubre, in a mansion of the 1930s, in need of repair.

Rosario runs a Spanish dance school in Curros Enríquez, an old society that bears the name of the poet and journalist Manuel Gallego Curros Enriquez (1851 Celanova-La Habana 1908). Now, in addition to pool tables and a coffee, the place has a hard-currency restaurant where you can eat pork and drink good Spanish wine.

At the door of the school, Rosario takes attendance of the girls who attend dance classes. She charges 40 pesos (about two dollars) for registration and 20 pesos a month. Twice a week, the little ones go to tap their feet on the stage on the top floor of Curros Enríquez.

When it gets dark, after preparing a frugal meal for herself and her husband, memories and nostalgia begin to visit her.

“My mother came to Cuba in 1937. She came with at 16 in her uncle’s care. His parents died during the civil war. He was a fierce republican. Not used to attending meetings of his countrymen. Desperately poor, he quickly adapted to that Havana of the flamboyant 40’s, full of neon lights and prosperity.”

Antonia Ortega did not have a store on the corner, like most Galicians on the island. Neither did she go on Sundays to the society of Rosalía de Castro to eat empanadas, while from an RCA Victor could listen to the football games of Deportivo and Celta Vigo.

“She was very stubborn and did not speak of her misfortunes. She preferred to convey to me the good memories she treasured of Santiago de Compostela. She was very ahead of her time. She married a black man, my father, thirteen years her senior. They lived together until he died in 1996. They felt a deep respect for their traditions. She with her songs and prayers, he and his orishas and the dead. I was very happy in my childhood. My father used to tell me about his ancestors in Nigeria, and my mother exuded nostalgia when talking about Galicia,” says Rosario.

This daughter of Galicia did not take advantage of the new law of historical memory that allows travel to Spain for hundreds of Cubans. “I’m too old to leave my homeland. I have no children and do not wish to burden anyone. My only dream is to visit the land of my ancestors. Santiago de Compostela and its ancient streets and the village of Calabar where my paternal grandparents were born.”

In the living room of her house a picture of the Sacred Heart of Jesus goes hand in hand with a group of Afro-Cuban deities located behind the door, to “trap all badness.”

It’s eleven at night. The neighborhood of Santos Suárez is calm. At half-light and the water wasting away by the faulty mains. In the distance, I hear the bagpipes of a Galician muñeira and behind, an African drum. It is not uncommon. It’s Cuba. A mixed island.