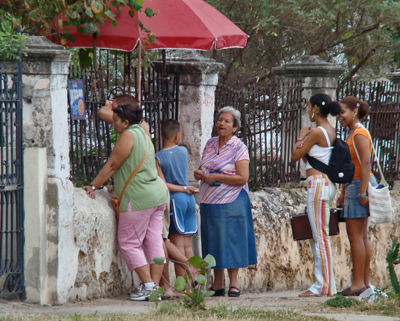 The line at a home-based private “pizza parlor” — takeaway only — in Havana.

Under the strict canons of the socialist economy — planned, centralized and subsidized — self-employment has always been seen as an undesirable species of pest that periodically needs to be abated and occasionally even exterminated. One day the specialists will write the history of the correspondence between the performance of the macroeconomy, the pace of foreign trade, and the response from the corridors of power in loosening or tightening the reins of this denigrated, but successful, creature.

Cuba once had a long tradition of small private businesses: bars, restaurants, shops, kiosks, repair shops and others, unimaginable. On the long night of March 13, 1968 they all disappeared at the exact moment in which, from the public square, Fidel Castro proclaimed the Revolutionary Offensive that confiscated everything.

In the mid-seventies there were a few small openings, but it wasn’t until 1994, under the crushing impacts of the fall-out from the collapse of the Soviet block, that self-employment and the establishment of small private businesses was authorized on a major scale. The country filled with places where you could eat a beefsteak or a Neapolitan pizza. The straitjacket that had controlled creativity began to loosen. Surprised, but happy, we Havanans saw how our city filled with little enterprises and houses converted into restaurants. The euphoria was short-lived, however, because faced with high taxes, a law that prevented the hiring of employees, and the long list of forbidden products, many of these entrepreneurs eventually gave up and shut down.

Now, Raul Castro’s government has announced that half a million State employees will be terminated and that self-employment will be expected to pick up the slack, with a broader authorization of licenses and more flexible contracting mechanisms.

My neighbor Humberto is relieved. In his private restaurant he serves more than a dozen dishes on the sly. Few know that on brilliantly white tablecloths he offers his customers lobster, shrimp and beef. These three products are highly penalized by Cuban law and their possession, “without papers,” can lead to a long prison term. Hence, they are not listed on the menu. But if trustworthy looking clients whisper in his ear, the forbidden delicacies emerge from the kitchen, far from the watchful eyes of the inspectors.

As the law, to date, has prevented Humberto from hiring anyone outside his own family, he tried to convince his daughter to marry — only on paper — an excellent chef who had recently left his job in a tourist hotel. When he discovered that his daughter was making secret plans to elope with her boyfriend, he thought he might have to surrender his license and trade the saucepan for an illegal taxi. Now, the government’s words have offered hope that he might not have to marry off his daughter to gain a chef. Who knows whether the new flexibility could also allow him to openly offer the proscribed menu items which for now he keeps hidden in his kitchen.