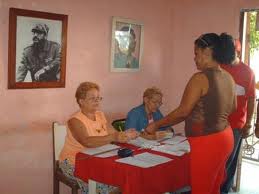 These have been rigorous days on the island of Cuba, the first elections after the 6th Congress of the Communist Party of Cuba. Full of bureaucracy, an evil that affects us deeply.

For whom will you vote? Few ask because they don’t have political information. Candidates with full resumes but nothing to identify what they are thinking. What the candidate himself brings; a degree or PhD, an internationalist or a simple worker and, the most praised, the “fighters”. They are only recommendations to choose who will represent you at higher levels.

The functions of a delegate for your area is is nothing more than to raise or take to the legislative body the needs of the citizens which they carry on their shoulders (they are the ones who represent you in government). But the word they do benefits themselves. If the delegate himself has “problems” there is no chance for others in need until their problems are solved. Although the delegate will always have problems and if you want to solve a problem, it is only with a bribe that most of your problems will be resolved.

Why have elections? It is a way for the government to show the world that “democracy” exists in Cuba.

With the manipulation of 53 years they become increasingly more skilled, the experience makes them stronger in managing to deceive the world with their intelligence maneuvers.