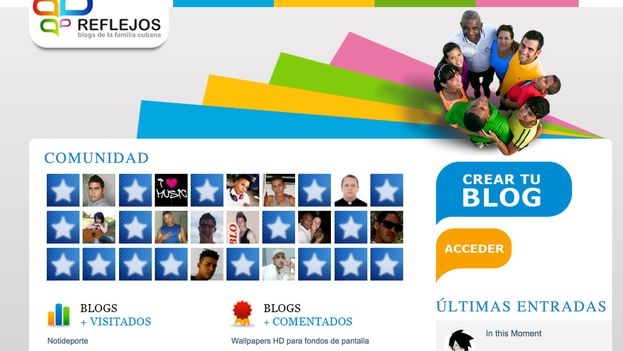 14ymedio, Luz Escobar, Havana, 19 March 2015 – On Wednesday, with great fanfare, the digital site “Reflections” was launched as part of the Cuban Youth Computer and Electronics Club’s Cuba Va (Cuba Goes) project. On its homepage you can read that this is the first Cuban blogging platform, although DesdeCuba.com, a blog portal, was launched eight years ago and, despite being blocked on the Cuban server, offers content generated in Cuba, where the majority of its authors live.

According to Kirenia Fagundo Garcia, who serves as senior specialist on Reflections, “there are no restrictions on the topics discussed on the blogs and users interested in the service,” on this platform. Each blog has only 250 megabytes allocated to post texts, photos, videos and sound, although Fagundo has made clear that it is planned to increase the initial capacity.

Despite the commitment to freedom announced by the portal, “the only condition is that the bloggers divulge the truth about Cuba, without offenses, disrespect or denigration.”Thus, several questions immediately arise: Who gave the Youth Computer Club the power to determine what is “the truth about Cuba”? Who is behind this project? Who is funding it? What institution, undoubtedly State or Party, will approve the content to be published?

To test the limits of the new platform, this daily has created a new blog on the service, under the title 14ymedio, with the purpose of bringing the contents of our digital portal to Cuban readers on servers on the Island. The process was easy, although to create a new site we had to provide the number of the user’s State-issued ID card, undoubtedly a surprise.

Moreover, the portal has several technical deficiencies, frequent error messages and agonizing slowness. Obviously it has been opened without having done sufficient technical tests to check its operation. The site 14ymedio.cubava.cu has been activated and the content manager that works with the entire platform is WordPress. However, it has been impossible, so far, to publish our first text. Technical Problems?

In the coming days we will test whether the new blogging platform is as plural as announced, or nothing more than one more simple mirror of the official discourse.