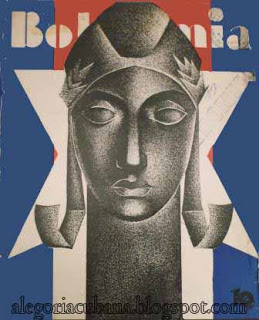 Poor little doll made of tinsel and wood, so battered across the long and narrow stretch of thousands and thousands of kilometers.

Last night, I saw her in Lawton, and it was daunting.

Because of her, and because of the bleak surroundings.  A neighborhood polluted from the disposition of its inhabitants to the sky that hangs above, propped up by the electric poles that shine a poor pasty yellow light. Houses like caves. Light and faces like grimaces. Light and the feeling that none of these collective biographies should be called human, let alone “from God” (amorphous animalia, ignorant by way of amnesia).

Light that only shines from the “Made in China”[1] patrol cars and in the sequins of the motorized traffic brigade.  The light that has an edge, but no faith in the insolent and proactive eyes of State.

At around 7:00 p.m., in winter time midnight begins in Cuba. It seemed like people were willing to shout anyone down, entertainment hysteria to welcome the weekend in style, as if it were a reggaeton concert (the style of clothing of the young people present proved it).

The motorcade barely slowed down under the traffic light although the corner of 16th and Dolores was a sea of bodies. I heard women curse the mothers of the drivers. I saw people hit the hood of the cars (in a remake of the movie Midnight Cowboy). The smell of conflict in the air did not abate, but added a patriotic spiciness to our pedestrian concept of devotion.

We remember the Virgin when she arrives, that is once during each Revolution.

And indeed, in her glass or acrylic shrine, carrying the pillar of our national coat of arms, and between the Vatican flag and our nation’s heroic rag (without Byrne-style[2] romanticisms in the 21st century: our flag represents barbarity, and I do not love it even if they force me to, mostly because it is the source of demagoguery uniting dictators and democrats).

The anonymous insular Mary finally descended on her rented automobile from the chapel kept by the nuns of Concepción Street, far beyond the Lawton bus depot, the now useless railroad lines and the already putrid River Pastrana; in that stretch of sub-industrial forest that invades the capital from the Cordón de La Habana[3].

Mambí Virgin[4].  The crowd running, cars honking, chants, clapping, prayers from the loudspeakers, a rope to keep the faithful in line. Human circles trained in the parishes, aging and semi-alienated men with their particular quasi-military but Christian-inspired speak plus 1970s fashions that include a dress belt up to their belly buttons. How uncool is Cuba!

Raw collage: Help out the Cuban faithful! It is a masquerade in which Cardinal Ortega comes out from under his own sleeves, and walks up B street to Porvenir Avenue, turns right on 10th Street, then speaks.

Our prelate looks exhausted behind the microphone. The Cardinal knows that Cuba does not love him any longer, first for being a coward and also an accomplice (among other closet secrets handled only by the Office of Religious Affairs of the Central Committee of a godless party).  No one pays attention to Jaime, “no thistle and no caterpillar”[5] he plants.  A drunkard kisses his hand, and the boys of State Security send the sudden devotee flying back to his non-place on the sidewalk.

And it makes sense that the words of an elderly man do not engage (nor fool) Cuba on this night: the superstar tonight is Cachita[6]. Besides, Ortega, since he first appeared on Cuban television without promotion or credits, keeps talking about Antonio de la Caridad Maceo y Grajales, a 19th century Cuban general who, before going out to kill his fellow men (or be killed by them), checked to make sure that he had, in his breast of starched mulatto, a little medal of the Virgin made of noble metal.

Then, the head of the Catholic Church in Cuba stops speaking, and finally is our turn alone with the headless incivility of the island.  And, we shower ourselves in vandalism: against the temple’s iron gates and up the steps, a movie scene not silent but screeching. Hundreds, thousands. Girls, old men. A man whose mother assured me that he had had a heart attack very recently. A lady whom I lifted from the sea of legs that would have crushed her (she was bleeding from her calves). And again expletives, holy debauchery.

The clerics and seminarians screaming with diction too correct to be violent, almost excommunicating their fellow congregants with primary school teacher admonitions like “if you don’t behave, there will be no virgin for anyone in this neighborhood.” We witness an avalanche of soccer finale proportions, or, of course, a concert in CUCs[7] for thugs who understand nothing.

This is our undeniable raw material (you cannot perpetually impose a myth from the minority, be it the Gospels or History Will Absolve Me[8]).  But, this stage set is missing the elite police brigade: the Special Forces units that perpetrate peace in a Special Period[9].

It is obvious that the Cuban state is interested in making the Catholic Church aware that so many processions a year will create a tragedy for them (I saw several women, all of them black, semi-unconscious being carried to different destinations). Let them buffet each other for a bit amid polyphony of laments and curses. But, it is obvious that some other worse curse words cannot be heard here:  “Liberty,” for example.

Right at that moment, some guys chide me because all of my pictures are focused on the people’s fisticuffs. We then argue over the possession of the truth.  I show them my white t-shirt that says “Laura Pollán Lives”[10].  They swirl around me and surround me while a woman loudly asks me from a distance for whom I work (they all have the language of the counter-intelligence TV series “Las Razones de Cuba”[11] and that of the official blogosphere), but I am already inside the temple, and I seek refuge by the main altar to capture the faces blessed by an Italian priests whose smile I cannot call divine, but democratic.

No wonder I have a work credential to shutterclick away without having my camera stolen or shredded “by mistake” or “by chance.”  And the Virgin that mother of all Cubans who precedes even the motherland, what is the Virgin doing here in her own procession?

Each prayer and each tear is accompanied by a picture taken with a cell phone. Our Lady of Charity is therefore a little bit of pop icon amidst so much media fruition (Nokiarity Syndrome). Her disposition seems a bit timid despite her olive skin, so clean and congenial, Cecilially she is a Valdés[12].  And, with a certain wooden modesty, it could be said that our virgin hides in Islamic fashion under her cloak of sorceress queen. Perhaps, it will be difficult for her to discern whether she is worshiped by subjects of God or Nothingness.  Perhaps She knows more than a few things about tomorrow (with that sad grimace of hers). Perhaps she feels very lonely, condemned to carry that baby who does not grow for eternity.

Poor little Cuban virgin, so fragile, surrounded by a flower holocaust, petals with that smell so peremptorily funerary.

Poor little virgin surrounded by the medieval Cuban populace, forced to the insomnia of the donated electric fans, walled behind that music so falsely happy for when death comes to us, egged on like a fugitive by the brown-out looming over the convent confiscated and turned into a school (this is precisely how the totalitarian state imposes its narrative: turning on and off the central switch).

Poor, oh poor, our Cachita, so invisible under the greedy gaze of the mob, willing to be Maceos in exchange for a quality miracle.

Poor, oh poor, my darling, so Cuban and yet no one in Cuba knows it because they are content with lighting some candles to you and asking you for a visa to the United States. No one spoke of love, my darling. No one in this island or in the Exile ever knew who you were. Now, for example, they will charge against me, but you and I secretly know very well that you and I recognized each other at least this once.

[1] In English in the original text.

[2] Refers to Bonifacio Byrne, a Cuban poet who wrote a famous poem to the Cuban national flag from the ship that brought him back to the island in 1899.

[3] El Cordón de La Habana (Havana Cordon) was a plan created by Fidel Castro to plant Caturra coffee beans (a Cuban native variety) around the Cuban capital in 1971-73.  Predictably, the plan failed because of soil incompatibility and administrative blunders.  It did manage, however, to successfully eliminate most of the little individual vegetable gardens in the area.

[4] Mambí were the Cuban rebels who opposed and rose against Spanish rule in the 19th century.  Many were devotees of the virgin, and carried her image into battle.  Virgen Mambisa is also the title of a 20th century hymn to the Our Lady that can be heard here:  http://youtu.be/cq9kGJ44ecw

[5] This is a play on words from Ortega and a verse in José Martí’s poem “Cultivo Una Rosa Blanca” that is in turn part of “Versos Sencillos,” a compilation of poems. The verse reads “cardo ni oruga cultivo/cultivo una rosa blanca”: “neither thistle nor worm I grow/I grow a white rose” roughly.

[6] Cachita or Cacha is a nickname given to women named Caridad (Charity) in Cuba.  The ever cheeky Cubans have given it to Our Lady of Charity as well.

[7] CUC is Cuba’s “convertible” peso, one of the two currencies in use in the island.  It is artificially paired to the U.S. dollar.

[8] History Will Absolve Me was Fidel Castro’s defense speech at his trial for the assault of the Moncada Army Barracks in 1953 in Santiago de Cuba. It was later made into a book, a sort of tropical Mein Kempf (from which it borrowed heavily, including the phrase used as its title).

[9] The Special Period (Período Especial) was the name given by the regime to the period of extreme economic straits following the collapse of the Soviet Union (Cuba’s main political and economic ally and subsidizer) in 1991.  Its end is not very well defined, but seems to have been around the time when the late Venezuelan strongman Hugo Chavez started to send oil and money to the island.

[10] Laura Pollán was the leader and founder of the Ladies in White, a group of Cuban women whose husbands and/or relatives were imprisoned during the purge known as the Black Spring of 2003.  They have marched, and still march peacefully every Sunday after Mass carrying gladioli and dressed in white asking, initially, for the release of their loved ones, and, now, that the regime respects the human rights of all Cubans.  They have been subjected to extreme abuse by the regime and its goons.  Laura Pollán died under mysterious circumstances in 2011.

[11] “Las Razones de Cuba” was multi-part a documentary produced by the counter-intelligence services of the Ministry of Interior in Cuba that supposedly unmasked covert operations of “enemies of the people” and revealed how the government has infiltrated the opposition movements.

[12] Another play on words: it refers to Cecilia Valdés the main character in the 19th century novel of the same name written by Cirilo Villaverde.