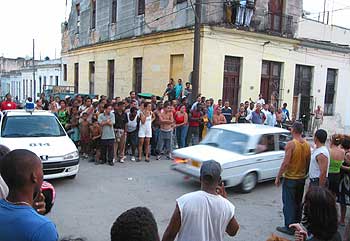 Neighbors witnessing the arrest of a dissident in 2003 — see more detailed note below.

2003 was an incredible year. Harassment, arbitrary detentions, acts of repudiation and verbal assaults against the opposition by the government were rising.

There was an escalation by the government against peaceful dissidents and independent journalists. Castro called a referendum to shore up his olive-green socialism. It was a response to the Varela Project petition, which had been submitted to the National Assembly by the opposition figure Oswaldo Payá Sardiñas. The petition was backed up by more than ten thousand signatures and, following procedures enshrined in the constitution, called on the legislature to undertake constitutional reforms.

In 1999 Castro had promulgated Article 88, a legal hodgepodge that mandated sentences of more than twenty years for dissidents and independent journalists under the pretext they were undermining the status quo.

Fidel Castro himself appeared on television and read a list with names of opposition figures who allegedly had contact with diplomats from the United States and the Czech Republic.

One could see that something was brewing in the sewers of power. The regime’s attacks in the media were missiles specifically directed at opposition leaders Oswaldo Payá Sardiñas, Martha Beatriz Roque, Oscar Elías Biscet, and the poet and journalist Raúl Rivero.

Months before the raid on dissidents, a furious Fidel Castro threatened the opposition in a speech at the Karl Marx Theater. “Don’t say later that you were not warned,” he told them. “We will not allow mercenaries to carry out their work with impunity, though we won’t kill butterflies with cannon fire.”

On March 18, 19 and 20, 2003 violent lightning raids were launched on the homes of more than eighty dissidents across the island, marking the beginning of surgical detentions intended to destroy the opposition.

It was a well-designed move. The international press corps was lining up to go to Iraq, where all signs indicated that war was imminent. According to Castro’s calculations, the administration of George W. Bush would soon be bogged down in a costly and exhausting war with the dictator Saddam Hussein.

It did not happen that way. In a devastating offensive lasting little more than a month, troops from the United States and its allies pulled down a statue of the tyrant in Baghdad. In spite of the clamor of war, the imprisonment of dozens of the island’s opposition figures did not go unnoticed by the world’s press.

International criticism was considerable. The government in Havana had not anticipated such a reaction. Some of Castro’s friends such as Portuguese writer José Saramago and Uruguayan writer Eduardo Galeano criticized the detentions. Saramago’s reaction was extreme. “This is as far as I go,” he said, abandoning ship and the fellow travellers who supported the bearded Cuban.

Initially up to a hundred dissidents were detained. Later the number was reduced to seventy-five. Settling accounts like an old wine merchant, Castro’s calculations were based on the assumption that the Bush administration would negotiate the release of ’his mercenaries’ by exchanging them for the five Cuban spies imprisoned in the United States.

To Castro this seemed like a reasonable exchange — fifteen “wretched worms” for each spy. Perhaps he was thinking back to 1961 when Kennedy exchanged baby food and cereal for more than two-thousand anti-Castro fighters imprisoned on the island after the Bay of Pigs fiasco.

The move came back to bite him. It was a crude political error. World leaders demanded the dissidents’ freedom, and the United States and the European Union further tightened the screws on the economic sanctions against Cuba.

Castro upped the ante. Taking advantage of the case of three Cubans who had commandeered a transport vessel, he decided to send a message to frighten the population. At the time, in their eagerness to reach the Florida coast, people were escaping any way they could. At a summary trial three black youths, who were living in poor neighborhoods of Havana, were sentenced to death.

It was bad. Dissidents and ordinary Cubans alike thought Castro had lost his mind. Meanwhile, dissidents and independent journalists like us lived in a constant state of anxiety. I walked around with a spoon and toothbrush in my back pocket.

I felt that at any moment I could be arrested. Luckily, this did not happen, though the phone was cut off for several days. We were all afraid. I still remember a distressed Blanca Reyes, wife of Raúl Rivero, describing his arrest and subsequent detention.

The evidence against him consisted of his articles and poems, an Olivetti typewriter, books by universally acclaimed authors and photos of his children, friends and family members. He was arrested in his apartment in La Victoria, where he had lived since his wedding. It is a rough neighborhood, a breeding ground for hookers, pimps and hustlers. People with no future who do not enthusiastically applaud Castro’s rants. It was in one of these poor central Havana neighborhoods where the disturbances of August 1994, known as the Maleconazo, the Malecon uprising, broke out.

On the afternoon of March 20, when Raúl Rivero was arrested, the street was filled with neighbors and onlookers. When he was put into a Russian car, his hands shackled as though he were a terrorist, some outraged neighbors began to shot “abusadores” and “libertad.”

Ten years after the Black Spring, efforts to destroy opposition groups, independent journalists and alternative bloggers have increased. Those of us who have worked for democracy and freedom of expression press on. Here we are.

Photo: Neighbors from the block where Raúl Rivero lived — on Peñalver between Franco and Oquendo streets in Central Havana — witnessing the arrest of the director of Cuba Press, an agency for independent journalism established on September 23, 1995. Among its founders are Iván García and Tania Quintero.