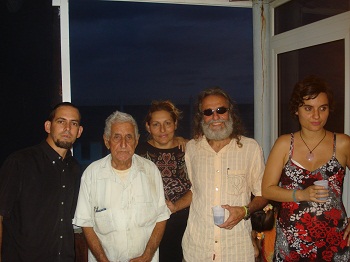 I have been many Lillis, and all are me, one of those Lillis tried to escape from a confinement to which my mother condemned me, at age 22 at the Fajardo Hospital, really depressed after an abortion and drugged by one Dr. Justo against my will, I jumped without knowing what I was doing from the third floor. I didn’t break even one bone but underwent a lengthy surgery.

Since then, craziness doesn’t sit so badly with me. But in countries governed by an ideology that demands concurrence and standardization, any display of sensitivity, any human reaction to such an inhumane order, can be considered insanity.

It is not I who says that, many people worldwide more intelligent than I or better informed have studied it. But I have suffered it, I know what it is about and the maturity of 30 years has granted to me that I like being who I am as opposed to being the same as all the rest. Within me there flow secret springs in which I believe in more and more each day.

Returning to the chronology; what I was doing before writing in my blog: Absurdities More Absurdities Less, seven years went by.

At one time, I loved Rene, the father of my daughter, in those nights in which we made love on the beach under the illusion of being truly in love and in fear that they would steal our clothes, an hour after having ecstatically watched, while sitting on the hood of a matte gold BMW, the cranes at the Port of Havana, that seemed like dinosaurs, moving the containers, as a night of so much fun followed me in the distance throughout Old Havana.

To be a mother did change my life. I want it all and above all I want it all for her, Olivia Mariana, more than my own soul. Her first name is for the olive trees, and the olives and the balsam trees and her middle name for the Virgin Mother of God.

In 2008, before the passage of Hurricane Ike, my father died in Santovenia, an institution for the elderly cared for by nuns. Miraculously, by calling on the Virgin of Guadalupe and the Mother Prioress, I was able to improve the situation for my father. I started living alone and taking care of everything, always on the lookout for my miracle and its verification.

I have changed skin so often, without ceasing to be me, dressing up, translating and betraying myself, trying on, getting lost and finding myself again. To save myself and my daughter,  God in my heart, always waiting for me to turn back, painting the next stage of my life, posing before me, the riddle in order to find him. My friend Macho whom I love very much and who has proven to be the oldest tree in my life, who resists me always, saying that I collect unusual situations.

Three years ago, my friend Jean sent me a Japanese man who wanted to rent the second room of my house for himself. I offered a ridiculously low price given the despair that I had about needing to buy food. As I like to respect the law, I told my future tenant that we would go to Immigration the next day to apply for permission. He asked me to move his things: consisting of two pairs of shorts, some shirts, two bags of soy milk and his computer.

They denied us permission, even though we pretended to be a pair of lovers, to the surprise of the officer who attended us because that Japanese guy was very gay.

While returning, something extraordinary happens to me. I felt it more than he, I needed that money from the rent in order to buy food but the fine for letting him spend the night without the permission of Immigration would be $1500 and we were already warned.

It was a memorable night because when I asked him nicely to gather his things since there was no deal made nor was there any advance payment and he had noting to lose but I did, he gave me a shove in the chest and said to me in Spanish with a “manga” accent “…tonight, no.”

I had to call some neighbors so that they would help me convince him. They called the police who sent an official who looked like the comedian “Cabo Pantera” who said to him in Japanese with the eastern accent of the police “What do you have there cousin?” pointing to an object that he had been keeping in his suitcase.

To my shock and surprise, it turned out to be a katana ( those curved swords of the samauri, this one was the size of a kitchen knife ) wrapped in a silk handkerchief. That image of the Japanese guy in slow motion unwrapping the sword wrapped in silk forms a part of the novel of my life.

The following year, I met a man with whom I had an intense love affair, younger than I, a professional chef, who besides being a pompous and pretentious lover, prepared the most exotic meals that I’ve ever tasted, and gave me a rest from my anguish over survival.

It never seemed odd to me that he always had some condoms at hand that were of a brand “Trojan” that are not sold in Cuba. One afternoon, I discovered that in order to maintain the household, he was pimping males to foreigners in Parque Central*. I thanked him for the “Trojans” which are strong condoms while I threw him out of my house without compassion

Last year I decided to test my luck selling products on the black market. They weren’t food products but could have been Colgate toothpaste, socks, “calentitos“( sexy underwear), blouses, or shirts. I ended up opposite a successful, independent merchant, the owner of that business that saves Cuban men and women from the exorbitant prices of clothes in the state-owned shops, clothes of even poorer taste than his which I understand come from Ecuador.

I must have not seemed very skillful with sales because about the only conversation he managed to have with me was his insistence on inviting me to have a beer but I don’t like those guys and I don’t like beer.

I left without merchandise to sell and I was no longer able to imagine myself going out into the street with a suitcase of clothes and Palmolive soap, stationed in the front steps of “Ultra“** like the other vendors that sell even fake ponytails.

When I think seriously, I realize I was lucky that he didn’t give me anything to sell, those guys are dangerous, but besides that, at that time, the sale of clothes “por fuera”*** was illegal and it would have been absurd for me to go looking for a problem with the law on account of something I don’t believe in anyway and it would not have made sense to go through with it and take responsibility for it.

Then I set myself to think about the desire I was feeling to meet Laura Pollán, to go to Santa Rita and extend my hand and a kiss to the Ladies in White and that I was willing to put myself at risk because I do believe in that. I never managed to go. When I got to know the house, Laura was no longer in this world because her ashes were being cast to the wind.

And from all that I was thinking and feeling then, I wrote my first post and baptized my blog and since then I feel like the person I am.

This terrible situation can no longer crush me without receiving my response, my punches, if I can make myself responsible for expressing myself in my blog. I can challenge the government that condemns the people to theft, to prostitution, to detrimental solutions that condemn the course of their lives for the rest of their lives, because the Law of Love that governs the Universe in spite of wickedness and of dictators, shields me.

It has also given me new friends; today Augustin of the blog Dekaisone who found out that we don’t have food and brought us beans, some meat, and pasta for a week. Having a blog doesn’t pay money but it gives the gift of a network of friends.

To recognize yourself in the soul of another person doesn’t let you fall. Living in this same city, seeing the same view, surviving those years without electricity, without food, without shoes, without understanding anything, at age 17, more rebellious than ever, made me find an alternative in the face of the sustained attack of the all-flattening ideology, the urgent necessity of finding God in my heart and that if God has named me, only for me, so that I never forget Him.

With this secret that can be shared, I aspire to unite my efforts with those of many people who work for the peace and freedom of Cuba.

*Parque Central near Old Havana, with its monument to Jose Marti, is where men meet to discuss baseball. It is located in an area frequented by foreign tourists and is surrounded on three sides by large hotels for foreigners.

**A large department store on Galiano Street in Havana.

***Literally “on the outside” this refers to clothes taken from the official supply chain and sold to others to sell on the black market. This is a way to increase sales volume and therefore profits.