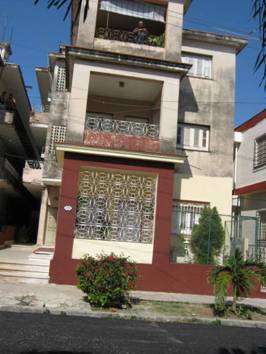 In my world the media spends its time talking about the unity of the people, of a single party (like that of Marti), a united vote, and so forth.

First of all, I want to clarify, that the widely used term one-party (referring to what the Apostle — Marti — founded) is a huge fallacy. It was Marti, of course, who created a party to unite Cubans who wanted independence for the island, that was the goal. Why would anyone create more than one? Once the war was over, the party was dissolved and others created, according to the different trends and opinions, as expected, in a system that proclaimed freedom and democracy.

As long as they cluck unity of the people, gentlemen, let me express my humble opinion, never before was this town so divided, or better said, did it behave so individualistically. The first thing the revolution did wasdivide us: pitting parents and children against each other and vice versa; breaking marriages of many years because of political contradictions never previously considered; confronting the neighbors who quickly learned, induced by fear, to keep an eye on and monitor each other. In two words: increased envy and pettiness and hence the division. This is just the Cuba that they do not show the guests of government, including of course the Pope.

For many years we can see in our cities multifamily buildings with the paint peeling and faded by time and neglect, where suddenly, we find a balcony, as well as a small perimeter encompassing the same, of a different color, shiny and gleaming, which further underlines the ugliness and the peeling of the rest of the building, showing publicly the lack of sensitivity and solidarity, as well as the bad taste of the occupants of the apartment in question.

This indicates not only differences in purchasing power, but poor communication between neighbors, not surprisingly, most do not have sufficient resources to take on the cost of painting the entire building, and evidently are unable to reach agreement.The government, during this half century, has only shown indifference to the deterioration and structural damage.Most citizens do not have the resources to improve their own homes.In these cases, the sensible thing would be to leave the outside of the building without paint, or to give it a clear whitewash type coating, in neutral tones so it does not stand out so much from the rest of the facade. 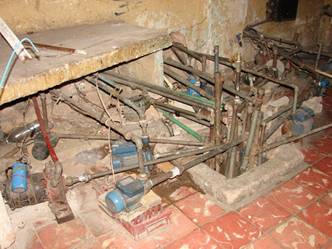 Also, walking the streets, we find round columns that separate townhouses, and these are divided in half, as indicated by a rule, and each half is a different color according to who owns the piece.But more often seen in the old buildings and mansions, which have been divided now into “solares” — a rabbit warren of small, often single room, dwellings — is the profusion of water pumps installed by the different occupants, each one his own, instead of collecting money from everyone to buy a more powerful one.

The same is true with makeshift water tanks on roofs and inside the apartments themselves, adding to the property, with all the dangers that this entails, a weight was not calculated either by architects or engineers involved in its construction.This is another of the possible causes of partial or total collapses, which occur almost daily in this city.

After carefully observing this citizen practice of saving what you can, verifying the accusations among neighbors and the thefts and the audacity to resolve their everyday problems, can anyone with half a brain believe in the vaunted unity that the media so exalts?