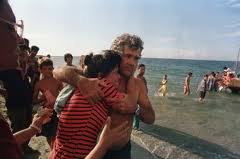 Hatred is a feeling that has united us to fight for true freedom in Cuba. It is very difficult to erase from memory the suffering of harassment and repudiation.

Hate also joined us to the struggle with the bearded ones, those leaders of great intelligence, Camilo, Fidel, Raul etc., used it as a stimulus to form an army and raise it against Fulgencio Batista.

With the triumph of the Revolution this feeling started to rise so strongly in the blog, that many forgot their neighbor, who for many years had supported them in life, giving food to their children… and for making a decision to leave the country, they were beaten by their neighbors, who had once been their great friends.

Others who went to see a brother dying in the United States asked themselves, “Why should I go back? Just for going to see my older brother who is dying of cancer, they called me ’worm’!”

Today, many repented, but in their conscience they’ve never forgiven what they did, they lost a great friendship over ideological differences.

Those who haven’t repented, continue marking a difference on their block, making life impossible in the neighborhood, conspiring with the neighbor sympathetic to the Yankees.

The traitors of the Revolution are found in the US today. They are so bad they’ve never forgotten their families, many maintained by a brother from outside, but the ’worm’ also has a soldier in the family who gets money.

It’s all in how you look at things, the northerners are bad for many things, but others no, but the government doesn’t recognize them or doesn’t want to, those who once left, today are a source of money and contribute to the economy of the country.

As the mourners ask why, if the desperation caused suffering and death. The decision to leave illegally on a boat was caused by the government, then to manage a smooth and hostility-free conversation to be able to achieve forgiveness. Is the government disposed to recognize its great mistake in how things have developed?