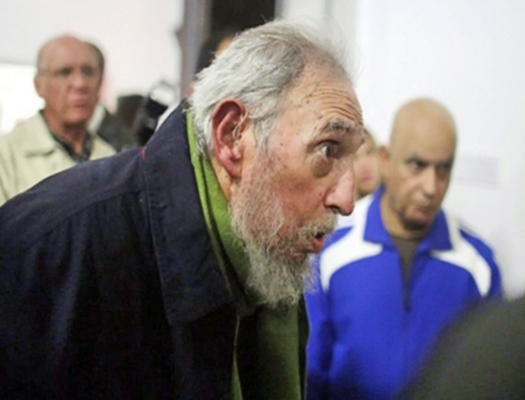 Cubanet, Rafael Alcides, Havana, 10 March 2015 — Let’s call him Hermes. Everything he says is said in private. I will not reveal his identity but, given the positions he has held, it is worth listening to what he has to say.

We all know these are confusing times, but imagine how much more confusing they would be if Fidel were to survive Raul. While hard to believe, it is not beyond the realm of possibility. While respectful of nature, for him it is the statistics that are significant.

We have in Havana fifteen thousand people living in provisional housing. In other words people whose homes have partially collapsed and who are more or less living in these places as best they can, some for twenty years or more.

That’s one-hundred fifty thousand people who hug their loved ones before they go to bed at night as though they were going off to war. One hundred seventy-five thousand people, both in temporary housing and waiting for housing, who — as architect Miguel Coyula pointed out at a conference sponsored by the Union of Cuban Artists and Writers (UNEAC) — is equal to the population of Matanzas.

Add to this political threat, says Hermes, the fact that Havana — with the exception of Nuevo Vedado — has still not been fixed and is like a wheel about to lose its spokes. Add to this the serious problems of internal plumbing and electrical wiring and carpentry… Replacing a window, just one (and most of them are rotted from termites), costs 100 CUC or more.

These problems are not unique to Havana; they are found throughout all of Cuba. Exactly how this has happened is not clear, but it is worth asking — adds Hermes — if, once Fidel and Raul are gone, will Cubans be willing to continue living and dying under such conditions.

His salary does not allow him to carry out repairs on his house. Nor would a bank be able extend him credit based on that salary, something that might have been possible one-hundred fifty or two hundred years ago. And even if it could, where would the country get the cement and the wood for such a monumental reconstruction effort. We are, therefore, faced with a problem created by socialism but for which socialism has no solution.

That’s the issue, says Hermes. That’s it. In other parts of the world there are the “landless.” Here there are the “roofless,” the ones who need things repaired, the ones who cannot wait to have things repaired. In these dramatic population figures, which encompass more than seventy percent of the country’s housing stock, he sees the inevitability of change, of the transition to democracy. Of course, all of this depends on Raul and Fidel not being around, as he points out.

Raul and Fidel were heroes. They were forged in war. The founded a religion based on it. They started handing out houses, handing out cars, handing out scholarships. For years they were like the Magi. For years they could count on bad American foreign policy decisions and people imagined themselves fighting alongside them. But aside from the legacy of destruction left by the Magi, what will their hand-picked successors and all those like them be able to offer?

Think about it, he suggests. Do the numbers. The path to the future will be based on pragmatism, not ideology. It is a matter of survival. Whoever comes after will not be able to imitate the Chinese. The country has been disappointed with the future that was offered to them a little over half a century ago.

Now the future as we imagnied it is gone. Anything with even whiff of socialism will cause a Cuban to quickly and decidedly go for his proverbial axe. We live in the age of the internet, says Hermes, and if the level of development we have seen in those countries which have left utopian socialist visions behind were not enough, we can now witness in Cuba the financial well-being of those who struck out on their own and began working for themselves.

For all these reasons Hermes is sleeping soundly. His digestion is good and he is laughing at the pessimistic prognostications of today’s soothsayers. He knows, as his numbers indicate, that anyone who did not seem to be political — the average guy who watched his house age without being able to make repairs or who watched it fall down — will be at the forefront of deciding the question of democracy’s future, even in the event that Fidel survives Raul.