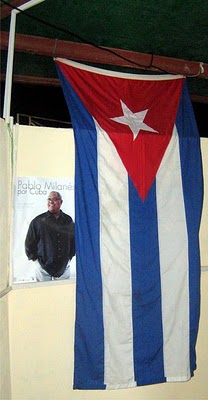 Pablo Milanes, the mythical founder of the Movement for the Nueva Trova (1972), began the second part of his nationwide tour “For Cuba” in the center of the island, only about ten minutes on a bike from my home. They premiered, even a rebuilt stage for large events on a track between insulated walls.

And off I went running, that it, pedaling, as always a little late, sure I would no longer find a space to see him sing for the first time, close up. But I was wrong.

Our beloved Pablo was sitting on a bench in front of a handful of people stuck on a platform at the end, basically on a track where law enforcement officers had been with almost nothing to do. It was a cold night, and suddenly, the loneliness was troubling. While crossing this long space to join the select audience, the distinctly melodious voice fluttered in the air, nothing could be more suggestive then the song “Days of Glory“: “The glory days were flying …”

To enjoy his voice, so fresh in the night like the first time. An intimate concert with chronicles of the little tragedies and delights that give human beings a stature to cherish: the lost childhood, the discovery of love … 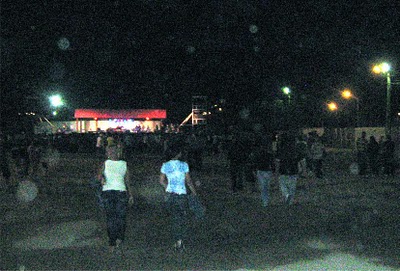 He took for his repertoire those pearls polished by generations, but they were cared for only in this moving chapter that he makes as pure and vital as the more traditional Cuban trova. No choirs of collective militancy.

Even while living in Spain, he knew and he was here to prove it as he had lately been giving his statements to the press, giving them to understand he will not shut up. So, we could enjoy humming the lyrics or the music of a love poem by Nicolas Guillen, without battalions being mobilized.

He kept in reserve this time the fuel that until recently he used in large amounts spent in meetings, rallies and other ideological pursuits. He also set aside the promotion and opportune initiatives, being an artist who for the last twenty years had not offered this type of event in his homeland, where he played a role in almost total anonymity.

Even a local weekly, two days before, reported the day and concert venue, but not the time. Insiders briefly set aside other concerns, and he would forgive us leaving behind that apocalyptic call to sink into the sea rather than “betray the glory that was lived” (“When I Met You“), to be happy breathing for a moment on the surface.

I discovered in the front row a friend, who was among those who looked back at the end of each song, as if in pain, to see if the audience had grown. He embraced his wife, and together they sang and cheered. 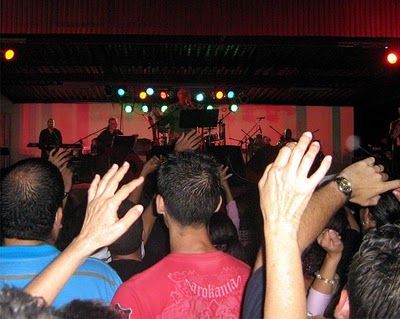 It seemed to me an image sufficiently good to justify the event, for it was not too long ago that they were not only separated but in the midst of a divorce, the burden of living with their two children and little hope of ever having their own home, he with the crippling of his honesty driven by a pittance of a salary, and an aggravating factor: he already know that this year he would become one more drop in the sea of the people who would be left unemployed.

Pablo Milanes ended up asking us to dream with “I prefer to share / before emptying my life” (“The brief space where you are not“), barely having the space necessary to introduce the musicians and thank the support team, a bow, and he left.

It all had not lasted more than an hour. My noble friend, when we shake hands, told me that more people had arrived and, finally, he was not so alone. He was referring to the troubadour.