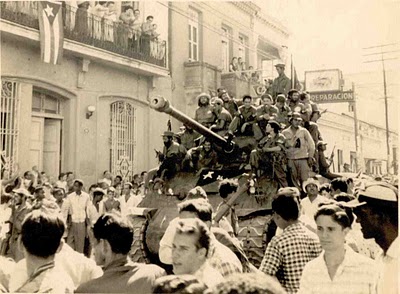 Helping hands sent me these words that made me think. Is this speech still valid. Will its author be accused of being a counterrevolutionary? For having demanded exactly those rights thousands of Cubans were treated as such, we were punished and stigmatized, over the 50 years that followed. Let’s see:

*Fragments of a speech delivered by Comandante Fidel Castro Ruz, in the Plaza of the City of Camagüey, January 4, 1959.

When a leader acts honestly, when a leader is inspired by good intentions, he does not have to fear any freedom…” (Applause)

It is precisely the tragedy of our people that we have not had a homeland. And the best proof, the best evidence we have that we do not have a homeland is that tens of thousands of the children of this country leave for other country, to be able to live, because they don’t have a homeland. And they are not all those who want to leave, they are all those who can leave. And that’s the truth and you know it. (Shouts)

Could the Comandante have been mistaken to give this speech? At what point did he deny giving that speech during the advance of the Rebel Army on the capital? When and why did he abandon that path? Then everything seemed possible. These words were directed to a people who only aspired to be assured to honest work to feed their children, to be allowed to live decently, to leave behind the material and spiritual poverty with the fruit of their labor; who wished to be represented by political leaders and not to betray their authentic working class interests; to have a home, however humble, to ensure a minimum level of comfort and security to their family; to enjoy the wealth generated by them without petty prohibitions humiliating them at the doors of hotels denied to them; to count on an ethical press, uncensored, that didn’t remain silent before any ignominy by divine decree of any party; to stop living in fear and lies; to conquer a Rule of Law that guaranteed that there was no power above the Law that could trample ordinary citizens with impunity, and to be able to live in dignity in their homeland without being forced to beg for their prosperity in other countries in the world.