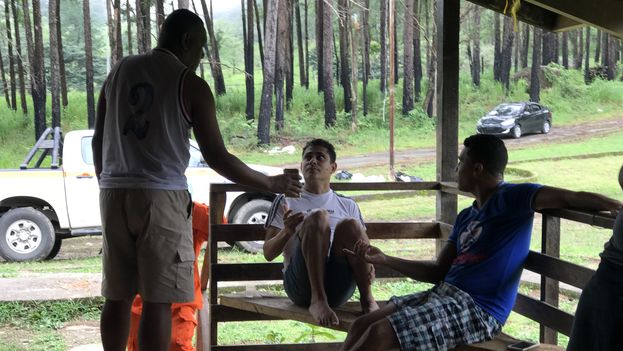 14ymedio, Mario Penton, David (Panama), 23 June 2017 — The green seems to fill everything in Chiriquí, in the western Panamanian province where the government hosts 126 undocumented Cubans in a camp in the region of Gualaca. The stillness of the morning in the middle of the huge pines that grow in the foothills of the mountains is only interrupted by the bites of insects, a true torture at dawn and dusk.

“This place is beautiful, but everything gets tiring, being in limbo is exhausting,” says Yosvani López, a 30-year-old Cuban who arrived in Gualaca in April after spending three months in the hostel set up by Caritas for Cuban migrants in Panama City.

“Sometimes we sit down and talk about what we would do if we could get out of here and get to another country. Some relatives tell us that they are preparing a camp in Canada to welcome us, others tell us that they have everything prepared to deport us. Illusions and fears,” he laments.

The camp that houses the Cubans was built by the Swiss brigades which, in the 1970’s, built the La Fortuna dam. It is 104 acres, occupied mostly by forests and a stream. One hour from the nearest city, the humidity is such that mushrooms and plants establish themselves even in the fibrocement roof tiles.

A day in the migrant camp for Cubans stranded in Gualaca, Panama (our apologies for not having this video subtitled).

Along with the wooden buildings, deteriorated by the passage of time, there are still satellite antennas, electric heaters and, according to the migrants, from time to time they find foreign currencies buried in the vacant land.

López was born in Caibarién, a city on the north coast of Cuba. Although he had the opportunity to emigrate using a speed boat to cross the Florida Straits, he preferred the jungle route to avoid the seven years moratorium on being able to return to Cuba that the government imposes on those who leave Cuba illegally.

“I wanted to go back before 7 years was up. I have my mother and my sisters in Cuba,” he explains.

He worked as a chef specializing in seafood at the Meliá hotel in the cays north of Villa Clara, earning the equivalent of $25 US a month. With the money from the sale of his mother’s house he traveled via Guyana and in Panama he was taken by surprise by the end of the wet foot/dry foot policy that allowed Cubans who reached American soil to stay.

“Here we pass the hours between chats with our relatives in Cuba and the United States, and searching the news for clues that will tell us what is going to happen to us,” he says.

The migrants in Gualaca not only do not have permission to work, but they can only leave the camp one day a week to go to Western Union, with prior notice and accompanied by presidential police officers, who are guarding the site.

Some, however, have improvised coffee sales and even a barbershop. The locals also set up a small shop to supply the undocumented immigrants with the personal care products and treats, which they pay for with remittances sent by relatives from the United States.

The authorities gave themselves 90 days to decide what they would do with the 126 Cubans who accepted the proposal to go to Gualaca. Two months later, the patience of the migrants is beginning to wear thin. At least six escapes have been reported since they were moved there. The last one, on Monday, was led by four Cubans, two of whom have already returned to the camp while two crossed the border into Costa Rica.

Since dawn, Alejandro Larrinaga, 13, and his parents have been waiting for some news about their fate. Surrounded by adults, Alejandro has only one other child to play in the hostel, Christian Estrada, 11. Neither has attended school for a year and a half, when they left Havana.

Alejandro spent more than 50 days in the jungle and, as a result of severe dehydration, he suffered epilepsy and convulsed several times. “It was difficult to go through it. It’s not easy to explain: it is one thing to tell it and another to live it,” he says with an intonation that makes him seem much more adult.

“We had to see dead people, lots of skulls. I was afraid of losing my mom and dad,” he recalls. But, although tears appear in the eyes of his mother while he recalls those moments, now he says he feels safe in Gualaca and spends his days playing chess.

“I want to be a chess master, which is more than a champion. Someday I will achieve it,” he says.

His mother, Addis Torres, does not want to return to the Island where she has nothing left because she sold their few belongings to be able to reunite with Alejandro’s grandfather, who lives in the United States. Although they have a process of family reunification pending at the US Embassy in Havana, the family does not want to hear about returning to Cuba.

They eat three times a day and even have a health program financed by the Panamanian government, but for Torres “that’s not life.”

“Detained, without a future, afraid to return to Cuba. We need someone to feel sorry for us and, in the worst case, to let us stay here,” she says.

Liuber Pérez Expósito is a guajiro from Velasco, a town in Holguín where he grew garlic and corn. After the legalization of self-employment by the Cuban government, Pérez began to engage in trade and intended to improve things by going to the US.

In Gualaca he feels “desperate” to return to his homeland, but he has faith that, at least, he will get the help promised by the Panamanian Deputy Minister of Security, and leave a door open to engage in trade.

“I am here against what my family’s thinking. There (in Cuba) I have my wife, my nine-year-old son and my parents, they want me to come back and pressure me but I am waiting for the opportunity to at least recover some of the 5,000 dollars I spent,” he says.

His mother-in-law, an ophthalmologist who worked in Venezuela, lent him part of the money for the trip. Indebted, without money and without hope, he only thinks of the moment he can return.

“During the day we have nothing to do. Sometimes we play a little dominoes, we walk or we go to the stream, but we have 24 hours to think about how difficult this situation is and the failure we are experiencing,” he says.

Liuber communicates with his family through Imo, a popular videochat application for smartphones. “They recently installed Wi-Fi in Velasco and they call me whenever they can,” he adds.

“Hopefully, this nightmare we are living will end soon. Whatever happens, just let it end,” he says bitterly.

This article is a part of the series “A New Era in Cuban Migration” produced by this newspaper, 14ymedio, el Nuevo Herald and Radio Ambulante under the auspices of the Pulitzer Center on Crisis Reporting.